October 12, 2016
Fall is here and with it an abundance of apples! What better way to pick up the pen again then with this fruit?? Apples have a long and varied history. Carbon dating of seeds found in Southwestern Asia suggest that apples may have originated there. There is also evidence of fossilized apple seeds dating to the Neolithic period found in England which suggests that a variety of wild apple was known. 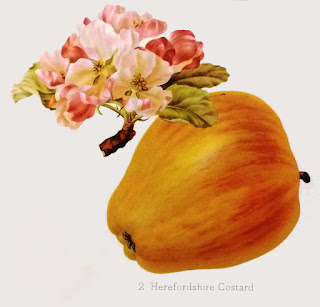 Whatever the origin, we do know that the Greeks were familiar with apples.  Homer writes about them in the Odyssey.  Hippocrates recommends sweet apples with meals as a way of aiding in digestion. The Romans however, developed the fruit that we are aware of today through the process of cross breeding for sweetness and grafting.   Pliny the Elder describes multiple varieties of apples that were cultivated in Rome.

After the Roman occupation of Britain, many of the orchards were left abandoned.  It was through the efforts of monks that many of the orchards were maintained.  The earliest known mention of apples in England was by King Alfred, who mentions them in his writings "Gregory's Pastoral Care". One interesting fact of note is that the monks were engaged in actively developing new varieties of apples.  One such apple, the Costard was well known in the 13th century, and the sellers of this variety were known as "costardmongers".

There are several recipes using apples in the "Two fifteenth-century cookery-books : Harleian MS. 279 (ab 1430), & Harl. MS. 4016 (ab. 1450), with extracts from Ashmole MS. 1439, Laud MS. 553, & Douce MS. 55 by Thomas Austin". The recipe I tried today is Apple Muse.  It reminded me of homemade apple sauce, with a faint hint of saffron and the creaminess of almond milk, it was also very similar to the  Harleian MS. 279 (ab 1430) - Chardewardon - Pear Custard recipe, the difference being that chardewardon is thickened with egg yolks, while the apple muse is thickened with bread.

lxxix. Apple Muse. Take Appelys an sethe hem, an Serge (Note: Sift) hem thorwe a Sefe in-to a potte; thanne take Almaunde Mylke and Hony, an caste ther-to, an gratid Brede, Safroun, Saunderys, and Salt a lytil, and caste all in the potte and lete hem sethe; and loke that thou stere it wyl, and serue it forth.

79 - Apple Mousse - Take apples and boil (cook) them, and sift them through a seive into a pot; then take almound milk and honey, and caste there-to, and grated bread, saffron, sandalwood, and salt a little, and caste all in the pot and let them boil (cook); and look that you stir it well, and serve it forth.

There are many recipes for this dish published online.  Several of them take additional steps of peeling and coring the apples. I did not do this step because the recipe doesn't specify to do it, unlike the recipe for .Cxxxiiij. Apple Moyle which specifically tells you to pare the apples before cooking.

Once the apples were tender I drained them and added them in the blender along with the almond milk (yay for modern technology).  I pureed them until they had become a sauce and then strained them through a sieve into the pot I had cooked the almond milk in.

I heated this mixture for a few moments and then began adding in the bread crumbs a little at a time until it thickened to an apple sauce like texture. I liked this dish, but I imagine it is not for everyone and this was confirmed by my taste testers who placed it into the category of "not their favorite thing".  When asked if they would eat it if served at a feast, suggestions were offered including, sprinkling with additional spices, or possibly adding a mixture of chopped dried fruits and nuts on top.  Previous pottage recipes suggest that dates and figs and/or Powder Douce would be appropriate toppings.

If I were to serve this at an event, I might choose to "cheat" and buy commercially prepared applesauce and add the almond milk to it.  The reason for this is that prepared this way, the apples had a very gritty texture which was what the taste testers found to be off putting.  As it stands, this dish does not make my list of things to try in the future.  It was very easy to prepare, and I would hope that someone would take the taste testers suggestions to heart if they chose to serve this dish at an event.

I am also wondering if the texture of a baked apple, versus a boiled apple would better fit the dish.  Since the recipe itself does not specify boiling versus baking, this might also be a suggestion for improving the texture and flavor of the dish.

XXXV - FOR TO MAKE APULMOS. Tak Applys and seth hem and let hem kele and after mak hem thorwe a cloth and do hem im a pot and kast to that mylk ofAlmaundys wyth god broth of Buf in Flesch dayes do bred ymyed therto. And the fisch dayes do therto oyle of olyve and do therto sugur and colour it wyth safrounand strew theron Powder and serve it forthe.

3. Again, emplumeus of apples: to give understanding to him who will make it, take good barberine apples according to the quantity of it which one wants to make and then pare them well and properly and cut them into fair gold or silver dishes; and let him have a fair, good, and clean earthen pot, and let him put in fair clean water and put to boil over fair and clear coals and put his apples to boil therein. And let him arrange that he has a great quantity of good sweet almonds according to the quantity of apples which he has put to cook, and let him blanch, clean, and wash them very well and put them to be brayed in a mortar which does not smell at all of garlic, and let him bray them very well and moisten them with the broth in which the said apples are cooking; and when the said apples are cooked enough draw them out onto fair and clean boards, and let him strain the almonds with this water and make milk which is good and thick, and put it back to boil on clear and clean coals without smoke, and a very little salt. And while it boils let him chop his said apples very small with a little clean knife and then, being chopped, let him put them into his milk, and put in a great deal of sugar according to the amount that there is of the said emplumeus of apples; and then, when the doctor asks for it, put it in fair bowls or pans of gold or silver.

To mak an appillinose, tak appelles and sethe them and lett them kelle ,then fret them throughe an heryn syff on fisshe dais take almonde mylk and oile olyf ther to. and on flesshe days tak freche brothe and whit grece and sugur and put them in a pot and boile it and colour it with saffron and cast on pouders and serue it.