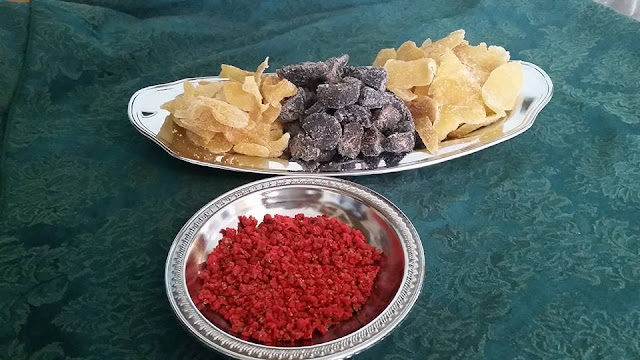 Please note, that this post has been edited to correct a mistake.  I had originally stated that Gum Arabic and Gum Tragacanth were the same things.  This is untrue as they are two different substances.  Mea culpa! My apologies to anyone who was misled by my mistake. Thank you to the individual who advised me on this.

Baronial 12th Night Comfits
Comfits were often served at the end of the feast to freshen the breath, act as a digestive, as decoration and sometimes used in the treatment of specific illness. Aromatic seeds such as anise (pictured in foreground), fennel or caraway were coated with sugar and colored using beet, spinach or saffron. They can also be made using almonds or ginger. Comfits can still be purchased today, for example Jordan almonds or pastilles. They are a bit time consuming to make but ohhhh sooo much tastier then the ones you purchase!

The easier comfits to make are the ones with seeds such as caraway, fennel or anise. Making cinnamon comfits is a bit of a process. To start I will walk you through the process of candying seeds such as anise, caraway or fennel. Many of the cookbooks that were published 1700's and after call for coating the seeds with a solution of gum arabic. This is a necessity if you are going to be making cinnamon comfits. To create your solution use 1 tsp. of gum arabic (if you can't get gum arabic you can also use tragacanth powder), to 3 tsp. rosewater. I let mine sit overnight and it becomes a thick, honey colored gel.

Heat the sugar and the water until it reaches 225 degrees. Heat the seeds in a large flat pan, similar to a wok or frying pan. I use a setting of 3 on my stove. If you can't comfortably reach into the pan and stir the seeds with your hand, then the pan is too hot.

Once the syrup has reached 225 degrees (for a smoother comfit, you need only heat the syrup to about 170 degrees), take a teaspoon of it and pour it over the seeds in the pan. Using the back of a wooden spoon, stir the seeds until the sugar dries. If the seeds stick together, you have used too much syrup. If the sugar forms pellets in the bottom of the pan then you have used too much syrup. The first few charges (coats) of the syrup the seed will look grayish, and then they will gradually begin to turn white. After about 12 charges, you are done for the day. I prefer my comfits smaller, so I usually do not do this process a second day. However, you can, if you wish, make another solution of syrup and coat your seeds again after they have had time to dry out overnight. The larger the comfits get, the more you will need to divide your batch. You need to be able to work with the pan.

If you choose to coat your seeds with gum arabic you will need to do that in the first few charges of syrup. The ratio that most of the later confectionary books used was 6:1 - 6 parts sugar syrup to 1 part gum arabic solution. It has an odd smell when you "cook" it, but that does not affect the taste.

Cinnamon comfits require an extra step. First you need to make sure that you are using "true" cinnamon, that is Ceylon Cinnamon, which is soft, crumbly and brittle. When you look at it, it is "compact" and consists of many layers. Cassia cinnamon is what you normally find in the store, and it is thick, and darker in color then ceylon cinnamon which is a light rusty brown in color. Once you have obtained ceylon cinnamon you will need to soak it overnight in water. This is so that you can shave it down into the needle like strips that are needed to make the comfit. Then you will need to let your cinnamon dry thoroughly.

Once the cinnamon has dried completely, proceed as above, being careful to coat the cinnamon with the gum arabic/syrup solution in the first three charges (coats). You will need to stop coating your comfits after about eight charges of syrup and let them dry overnight. Then you can make another solution of syrup and continue the next day.

Beet juice, spinach juice and saffron can be used to color your comfits in the last several charges of syrup, or, you can add a few drops of food coloring if you wish.

Update: Regarding cinnamon comfits,  I have been able to make these successfully without soaking ahead of time.