Baronial 12th Night Recipe for Rastons
This month I have decided to focus on various sops and pottages from Harleian MS 279. Sops are thick slices of bread which have been soaked in liquid, usually a broth and then eaten. They were quite common during the period, yet we seldom see them featured at the banquets that are recreated in the SCA. An example of a modern day sop, would be the bread you find on top of french onion soup! Pottage is another word that can be used for a soup or a stew. For my next several posts you will see that this kind of cooking is a very simple kind of cooking, using ingredients that many cooks have on hand. I believe it would be an easy way to "add" an extra dish at the beginning of a course without breaking the budget.
Given my focus on simple soups or stews, I wanted to create bread that would have been used in the same period. I am using a recipe for "Rastons". This recipe creates a small round loaf of bread that has been fortified with eggs. Traditionally, the top is cut from the crown of the bread, the bread removed from the inside of the loaf, crumbled up into crumbs mixed with clarified butter, the hollow refilled, the top put on and the bread baked till it was warmed. I am not planning on using a traditional method; however, as I plan on simply cutting the bread into "sops" for my next few posts.

Dan Myers offers this interpretation for the recipe above at his site Medieval Cookery. If you have not visited his site. I urge you to do so!

25. Rastons - take fair flour, and the white of eggs, and the yolk, a little; then take Warm Barm, and put all these together, and beat them thereto, and then let rest a while: then caste in a fair place in the oven, and let bake enough: and then with a knife cut it round above in the manner of a crown, and keep the crust that thou cut; & then pick all the crumbs within together, and pick them small with thine knife, and save the sides and all the crust whole without; and then cast therein clarified butter and mix the crumbs and butter together, and cover it again with the crust, that thou cuttest away; then put in the oven again a little time; and then take it out and serve it forth.

I read somewhere, and I wish I had thought to save the information, that to recreate the "flavor" of ale barm, which many recipes call for, you add yeast to ale. In order to attempt to recreate the flavor of the "ale barm" the recipe calls for that is what I did. I used The Hairless Hare Brewery's "Brown Barrel Bomber" which is a bourbon barrel aged ale. I also mixed my flours with a 3:1 ratio of unbleached white to whole wheat in an attempt to simulate what the bolted flours of the time period would have been like. I also added a tsp. of real salt to the flour. 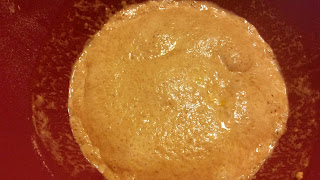 I mixed a1/2 cup of flour with the ale (warmed to about 110 degrees), sugar, eggs and yeast together, let the yeast dissolve and then let it ferment until it created a sponge. I added the fermented yeast mixture to the remainder of the flour and then shaped it into a round loaf. I covered the loaf and let it rise until it had doubled in size.

Note: The dark color is coming from the very dark ale I used.

After the loaf had doubled in size I baked it in a 450 degree oven for approximately 20 minutes, until it sounded hollow. If I were following the traditional recipe at this point, I would let the loaf cool, cut the top off, hollow out the loaf, and mix the crumb with butter. Eventually, I plan to come back and revisit this recipe, completing it as it should be completed. 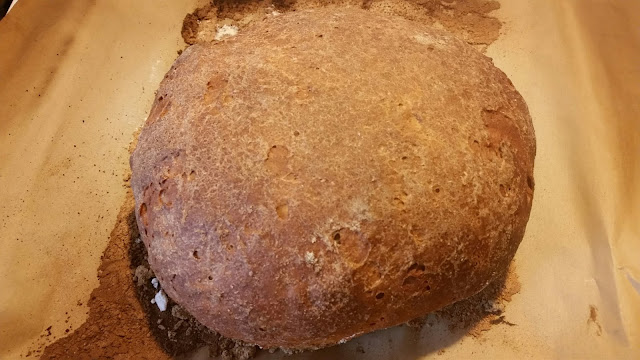 The bread itself is very pleasant in taste, soft textured with a good crust. I prefer it to my beloved Manchet of the French bread. The loaf is good sized, and it is not as time consuming as the other breads that I have made in the past. This is definitely on my "keeper" list.

It has been pointed out that the use of the word "bread" in this post may not be correct.

Jim Chevallier, who is much more learned then I states "CECI N'EST PAS UN PAIN (roughly --it's not bread)

I was just browsing an academic study of language which cites what the author calls a fifteenth century recipe for bread. Intriguing, since I know of no bread recipes that early. Then, following up, I found it was in fact the classic recipe for "rastons" - that is, in French, ratons, or little rats.

These were NOT breads. The recipe in question includes egg whites and yolks, reflecting the fact that that a raton was a PASTRY. But this is not the first time I have seen this recipe presented as being one for bread.

It is not. That is, if you make this recipe, it will not tell you what common bread was like in fifteenth century England.

A nice enough recipe. But not for bread.