What do you get when you add toasted pieces of sugar coated bread to wine? Soupes Jamberlayne, also known as Sops Chamberlain. This is another very easy, quick to throw together recipe that could easily be incorporated into a feast using items the cook may already have on hand.

Dan Myers of Medieval Cookery offers this interpretation at his web site "Medieval Cookery". I highly recommend this resource for anyone with an interest in cooking, specifically historic cooking. Please visit.

xxviij - Soupes Jamberlayne. (Note: Chamberlain.)--Take Wyne, Canel, an powder of Gyngere, an Sugre, an of eche a porcyoun, than take a straynoure and hange it on a pynne, an caste ale ther-to, an let renne twyis or thryis throgh, tyl it renne clere; an then take Paynemaynne an kyt it in maner of brewes, an toste it, an wete it in the same lycowre, an ley it on a dysshe, an caste blawnche powder y-now ther-on; an than caste the same lycour vp-on the same soppys, an serue hem forth in maner of a potage.

28. Sops Chamberlain. Take wine, cinnamon, and powdered of ginger, an sugar, and of each a portion, than take a strainer and hang it on a pin, and cast all thereto, and let run twice or thrice through, till it run clear; and then take pandemain (bread) and cut it in manner of broth, and toast it, an wet it in the same liquor, and lay it on a dish, and cast white powder enough thereon; and then cast the same liquor upon the same sops, an serve them forth in manner of a potage.

1 cup wine (I used Hunter Red from the Winery at Versailles
2 tsp. each cinnamon, ginger and sugar 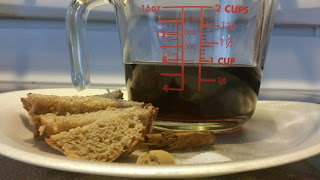 Heat wine, cinnamon, ginger and sugar till it comes to a boil.  Let boil for five minutes.  In the meantime, cut your bread into slices and toast.  When the bread has toasted cut it into finger length strips, these will be the sops for your soup.  Dip the bread into the heated wine, and place them in a bowl.

Note: If the bread gets too wet, it will be difficult to remove from the broth. Trust me on this.

Strain the heated wine and spice mixture two or three times through cheesecloth to clarify it.  I skipped this step and had no ill effect. Pour the broth over the bread and sprinkle with white powder.  Serve. 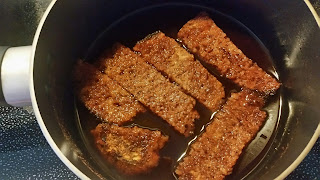 I found that this to be a very pleasant dish to eat.  The wine was very fruity, and the spices brought out those flavors.  The bread soaked up the wine, and it provided texture.  I would definitely serve this at a future banquet. One thing that I might do differently would be to put the wine in the bowl at the last minute and then top with the bread and then add the spices.  I think it would present prettier.  No matter how you present it, it's delicious!
To Serve 8 as a Side Dish (Recipe multiplied by 2 and rounded to nearest cooking fraction)