Curiosity has driven me to return to interpreting and testing recipes from Harliean MS. 279, and most recently I started working with recipes for egg and dairy dishes. Milk Rostys had caught my attention, is it a cheese? Custard? What? I had theorized that it might most closely resemble a medieval grilled cheese sandwich if it were served on bread. I was wrong. Instead I was delighted to discover that Milk Rostys are their own unique thing, eggy and delightful when completed. I have added them to my repertoire of things to be served at a banquet in the future.

The recipe is found in Thomas Austin's "Two fifteenth-Century Cookery-books" in a section that has been titled "Leche Vyaundez" which is a selection of foods that can be (in the most simplified terms) sliced. It is a diverse section that includes recipes on "Brawn in Comfyte", "Cokyntryce", Gyngerbrede" and "Chawettys a-forced".

xxix Milke Rostys -- Take swete mylke, and do it in a panne; take Eyroun with alle they whyte, & swenge hem, & caste there-to; colour it with safroun, and boyle it that it wexe thikke; than draw it thorw a straynoure, and nym that leuyth, & presse it: and whan it is cold, larde it, & schere on schevres, & roste it on a Greddelle, and serve f [orth].

Dan Myers offers this interpretation for the recipe above at his site Medieval Cookery. If you have not visited his site. I urge you to do so!

xxix - Milke Rostys. Take swete Mylke, an do it in a panne; take Eyroun with alle the whyte, and swenge hem, and caste ther-to; colour it with Safroun, and boyle it so that it wexe thikke; than draw it thorw a straynoure, and nym that leuyth, (Note: Take what remains) and presse it: and whan it is cold, larde it, and schere on schevres, (Note: Shivers; thin strips) and roste it on [correction; sic = MS. [amp] on] a Gredelle, and serue forth [correction; sic = f].

29. Milk Roasts. Take sweet milk and put it in a pan; take eggs with all they white and mix them and cast thereto; color it with saffron, and boil it so that it waxes thick; then draw it through a strainer, & take what remains, & press it: & when it is cold, cut it & slice in thin strips, & roast it on a Griddle & serve it forth. 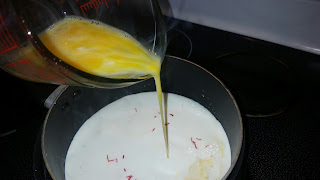 After my previous experience working with Let Lory I made a double boiler to prevent the milk roasts from burning on the bottom of the pan while waiting for the whey and curds to separate. Bring bottom pot to a boil. Heat milk and saffron to boil over medium high heat. Beat the eggs and add them to the milk (I added a tsp. of salt to the eggs). 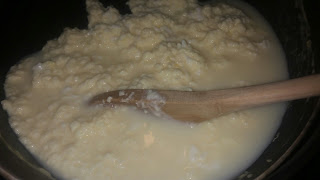 Slowly bring mixture to a boil stirring constantly. Continue to stir the mixture until the mixture has thickened and curds have formed and separated from the whey.


Remove from heat and strain the cheese mixture through a strainer that has been lined with cheesecloth. Press out as much liquid as possible (I did this by placing a dish on top of the cheese and adding a one pound can on top of the dish). 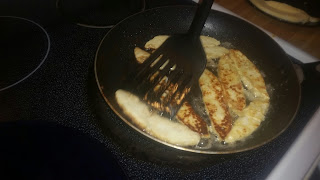 The whey can be used in making bread or other items so there is no need to discard it. Take up the cheesecloth and remove the cheese to a dish. Slice the cake into 1/2 inch thick pieces.

Heat butter (bacon grease, lard) in a frying pan. Fry the slices until browned on both sides. Remove to a serving dish and serve hot.

Below is a picture of the completed dish--I tested it on three (Non-SCA) teens, a Non-SCA child under the age of ten and a Non-SCA family friend. It was all completely gone in a matter of a few minutes with folks asking for more. They were excellent hot, and very good at room temperature. I declare this a success! 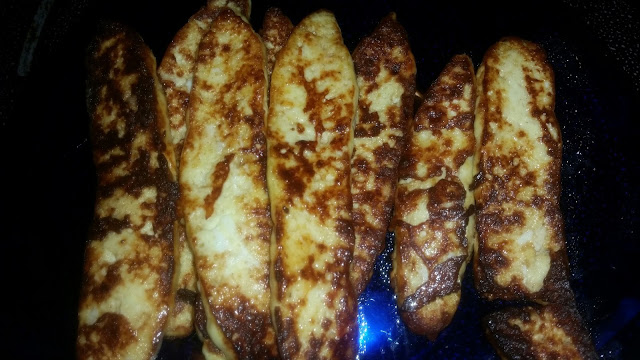 Check out these recipes which are similar found in other cookbooks.

XXV - FOR TO MAKE MYLK ROST. Nym swete mylk and do yt in a panne nyn eyryn wyth al the wyte and swyng hem wel and cast therto and colowre yt wythsafroun and boyl it tyl yt wexe thikke and thanne seth yt thorw a culdore and nym that, leyyth and presse yt up on a bord and wan yt ys cold larde it and scher yt on schyverys and roste yt on a grydern and serve yt forthe.

To mak mylk rostid swynge egges and swet mylk togedur put ther to saffron and boile it till it be thik then sethe it and sie it throughe a clothe and pres the remnyant and lesshe it cold and serue it in schyves.