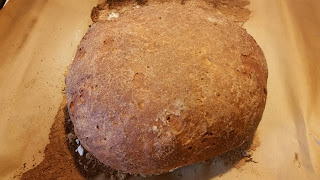 Rastons? Is it a bread or a pastry? My most educated guess is "yes"-- all breads are a kind of pastry, but not all pastries are bread.  There have been several very lively discussions about this particular bit of history and whether or not the end product constitutes a pastry or a bread.

This particular recipe takes flour and eggs, mixes it with a leavening agent ( þan take Warme Berme), and then instructs you to let it rest ( & þenne lat reste a whyle), the end result being a product that is not unlike modern day bread.

I will leave it to you to continue the debate.

.xxv. Rastons.—Take fayre Flowre, & þe whyte of Eyroun, & þe ȝolke, a lytel; þan take Warme Berme, & putte al þes to-gederys, & bete hem to-gederys with þin hond tyl it be schort & þikke y-now, & caste Sugre y-now þer-to, & þenne lat reste a whyle; þan kaste in a fayre place in þe oven, & late bake y-now; & þen with a knyf cutte yt round a-boue in maner of a crowne, & kepe þe cruste þat þou kyttyst; & þan pyke al þe cromys withynne to-gederys, an pike hem smal with þin knyf, & saue þe sydys & al þe cruste hole with-owte; & þan caste þer-in clarifiyd Boter, & Mille*. [melle A. (mix). ] þe cromeȝ & þe botere to-gedereȝ, & keuere it a-ȝen with þe cruste, þat þou kyttest a-way; þan putte it in þe ovyn aȝen a lytil tyme; & þan take it out, & serue it fortℏ.
25. Rastons- take fair flour, and the white of eggs, and the yolk, a little; then take Warm Barm, and put all these together, and beat them thereto, and then let rest a while: then caste in a fair place in the oven, and let bake enough: and then with a knife cut it round above in the manner of a crown, and keep the crust that thou cut; & then pick all the crumbs within together, and pick them small with thine knife, and save the sides and all the crust whole without; and then cast therein clarified butter and mix the crumbs and butter together, and cover it again with the crust, that thou cuttest away; then put in the oven again a little time; and then take it out and serve it forth.
Rastons
1 cup lukewarm milk
1 cup lukewarm water
1 egg beaten
1 tbsp. sugar
1 1/2 tbsp. Yeast (not quick acting)
Bread Flour

This recipe creates a great loaf of bread that can be frozen. I replaced the ale called for in the original recipe with milk and water. I also chose to use unbleached bread flour instead of a mixture of white/wheat I had used previously. I had originally meant to freeze the dough and cook the bread on site day of. Research indicated that in order to freeze dough you needed to increase the amount of yeast to compensate for the yeast that would die during the freezing process, so I also increased the amount of yeast. Also, due to a bought of "foggy head syndrome" I forgot to add the salt to the tweaked recipe, ergo, no salt. If you prefer sweeter bread, no salt is needed, however, if you prefer your bread not so sweet, be sure to add salt to the dough.

I wish I had gotten pictures of this bread--it was beautiful. The recipe above creates two round loaves of soft crusted bread with a good crumb.

Heat milk and water to just above body temperature. While your water and milk are heating mix yeast and sugar with 1 cup flour. Beat egg. Add the warmed water and milk to the flour and yeast and then add beaten egg. Cover and set aside at least 20 minutes. When you return the sponge should be frothy and bubbly.

Slowly add in flour until a soft dough is formed. Shape the dough into rounds and place on your baking sheet. I usually use a little bit of oil to stick parchment paper to the pan, and then dust with a handful of flour so the bread does not stick. Cover the loaves and allow to sit until doubled in size. Spray the loaves with cooking spray if you want a browner crust, otherwise, place into a 400 degree oven for about 20-25 minutes. Or until crust is golden and bread sounds hollow when thumped.


At this point you can freeze the loaf or serve. If you wish to serve according to the instructions, cut off the top of the loaf and scoop out the crumb, like you would if you were creating a bread bowl. Mince the crumb of the bread, mix with clarified butter, replace the top and set the loaf back into the oven for several minutes before serving.