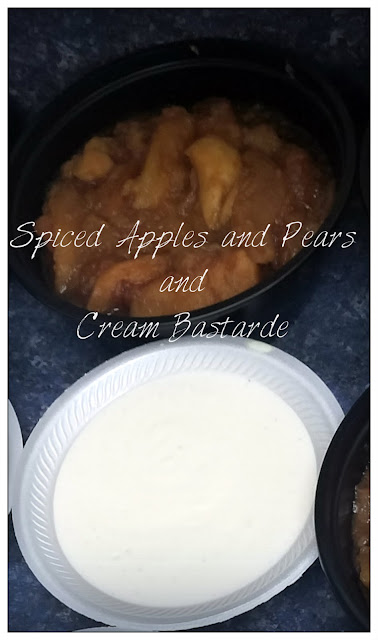 The Two fifteenth-century cookery-books : Harleian MS. 279 (ab 1430), & Harl. MS. 4016 (ab. 1450), with extracts from Ashmole MS. 1439, Laud MS. 553, & Douce MS. 55 Thomas Austin contains instructions for a custard made exclusively with egg whites. This dish appears to have been very popular and instructions for it can also be found in the later tudor period. As previously discussed, custards enjoy a long history. The Romans enjoyed many sweet and savory egg based dishes, but it wasn't until the middle ages that "custards", as we understand them, hit their prime. Some of these dishes, like the hardened custards known as let lardes or milke rosty's have fallen out of favor.

I recently served this at our local Baronial 12th Night alongside stewed apples or pears (pictured above.) I discovered that my own interpretation was nearly identical to that of Peter Breverton's found in his Tudor Cookbook. It is his interpretation I have included here which includes nutmeg and cinnamon and the addition of the orangeflower water. This created a very light custard sauce that was amazing with the apples and the pears. It also would be excellent on its own or with strawberries, or cherries.

.Clj. Creme Bastarde.—Take þe whyte of Eyroun a grete hepe, & putte it on a panne ful of Mylke, & let yt boyle; [leaf 26.] þen sesyn it so with Salt an hony a lytel, þen lat hit kele, & draw it þorw a straynoure, an take fayre Cowe mylke an draw yt with-all, & seson it with Sugre, & loke þat it be poynant & doucet: & serue it forth for a potage, or for a gode Bakyn mete, wheder þat þou wolt.

Clj - Creme Bastarde. Take the whyte of Eyroun a grete hepe, and putte it on a panne ful of Mylke, and let yt boyle; then sesyn it so with Salt an hony a lytel, then lat hit kele, and draw it thorw a straynoure, an take fayre Cowe mylke an draw yt with-all, and seson it with Sugre, and loke that it be poynant and doucet: and serue it forth for a potage, or for a gode Bakyn mete, wheder that thou wolt.

151. Cream Bastarde - Take the white of eggs, a great heap and put it on a pan full of milk, and let it boil, then season it so with salt and honey a little, then let it cool, and draw it through a strainer, and take fair cow milk, and draw it with-all, and season it with sugar, and look that it be poignant and sweet: and serve it forth for a pottage, or for a good baked meat, whether that you will.

You will need to use a double boiler to make this to keep the custard from scorching. If you are unfamiliar with a double boiler or how to use one, here are the instructions. You will need two pots, one that fits easily inside the other. In the larger pot you will want to put a couple inches of water (I always use enough to cover about an inch of the side of the smaller pot). Always, always, always, always use a double boiler if you do not want heat directly on the food you are cooking; custards, melting chocolate and making fruit curds are examples of appropriate times to use a double boiler. Many will say that I am incorrect in making sure that water comes up the sides of the smaller pan, but, it was good enough for mom and grandma, that makes it good enough for me ;-)

Add your milk, egg whites, honey, sugar and salt to the pan. If you are going to use the spices add those as well. Turn the heat up under the bottom pot and stir--stir--stir until your custard has thickened. I know --I think I broke all of the rules for this. Ideally, you would heat the milk, temper the eggs and add them back to the pot and cook until it thickens to custard.

Once the custard is thickened to your likeness, remove from the heat, strain if you need to in order to remove the cinnamon sticks and any curds that may have formed, and set aside to cool. When cool, add your orangeflower water and serve. - Courtesy Peter Breverton, The Tudor Cookbook