“What is a weed? A plant whose virtues have not yet been discovered.”
~Ralph Waldo Emerso 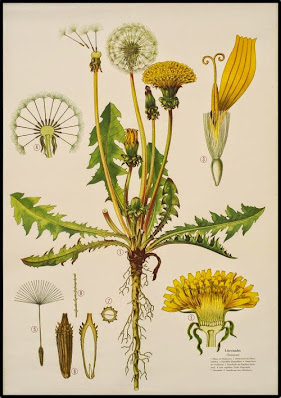 Family: Asteraceae
Usage: Culinary, Medical
Whether you are referring to the dandelion as blowball, lion's tooth, cankerwort, fairy clock, priest's crown, wild endive or pissabed, you are referring to a plant that has long been known for its culinary and medicinal properties. One of the earliest known greens, and a common and misaligned flower, dandelion's make very good eating and were not unknown in period.

The official name is Taraxacum officinale, which is a derivative of the Arabic tarakhshaquin, "wild chicory" or "bitter herb", and also refers to "wild endive". In Latin, the plant was referred to as Dens Leonis, the Greeks referred to it as Leotodum. The Welsh refer to it as Dant y Llew as early as the 13th century. The French, the dent-de-lion, and the English gave it the name we are now familiar with--the dandelion.

European dandelions were imported to North America by our ancestors because it was a familiar 'potherb'. It is thought that dandelions may have arrived as early as the arrival of the pilgrims on the Mayflower. It is believed that the seeds were deliberately scattered in order to establish a wild population and to provide food for honeybees which were also introduced from Europe (Ombrello).

What is a potherb? A potherb is defined as any leafy herb or plant that was grown for culinary usage and prepared by cooking in a pot. In fact, there are records of dandelion seeds being for sale in seed catalogs as early as 1874 (Rubel, 2015).

Dandelion greens are bitter, and the first mention of dandelions are for their medicinal usage rather than culinary. They are a good source of vitamins A, B complex and C and are rich in minerals such as zinc, potassium and iron. Using the roots of the plant roasted as a tea does have a diuretic effect. The first written records of dandelion can be found in 7th century Chinese records. In the 10th century the Arabs wrote about it. In 1485, the first referance in Europe can be found.

Medieval people ate a wider range of greens then we eat today. Many of the greens that were consumed are considered weeds today. The fresh leaves of the dandelion were served in salads or cooked as greens in period. The flowers may have been used as a coloring agent, as they do produce a yellow coloring and could have been used in place of saffron. I have not been able to determine if that is so. It is a guess on my part.

James Beard has this to say of the much aligned dandelion: "A sea of golden dandelions thrusting up thorough the grass is a pretty sight--and inspires thoughts of gastronomic possibilities as well. Though familiar to us all, dandelions are not, as far as I know, native to this country. There is a legend that the first plants were brought here by a woman who greatly enjoyed the provocative, distinct taste of fresh dandelion greens in a spring salad. Being hardy little plants, dandelions then spread all over the country. True or not, the idea of transplanting a European weed for gastronomic delight is a romantic one. There was a time, both in England and here (especially through the Pennsylvania Dutch country), that dandelions were gathered and flowers picked off the stems to be made into dandelion wine. This was recognized as tonic by many people who eschewed alcohol, but would have a little nip of dandelion or parsnip wine for their health. It was worth nipping, though not a wine of such character or distinction that one would want it constantly. However, during Prohibition and during times when women thought it was not the thing to drink wine in public, a sip of dandelion wine was considered good and comforting....I have a book by Macmillan deLoup, published in New York in 1899, which lists three different recipes for dandelion salads, along with this remark: 'These are not yet popular in the United States, but the peculiar bitterness is relished by some people and is said to be most healthful.' Dandelion greens have long been popular in France and Italy, and remain so. There are even a couple of cultivated varieties that are not members of the species that pops up unannounced in one's garden. They are used in spring salads with a dressing of olive oil, vinegar or lemon juice, with salad herbs or mustard added. I love the slight bitterness and refreshing quality--it goes so well with a grilled chop or a steak. Years ago, when I was flirting with the idea of a career as an opera singer, I studied with a brilliant Italian coach in London. He also was a great connoisseur of food and a very respectable cook. He would gather dandelion greens, or find them in the markets, and concoct a most delectable mixture for Sunday lunch. This would be the first course, followed perhaps by some cheese and very good bread, or maybe chops or a chicken (Beard, 1981)."

THE BOOKE OF SIMPLES. (Bulleins Bulwarke Of Defence Against All Sicknesse, 1562)

What is the vertue of Dandelion or Lyons teeth

IT is temperate, cold, and drye: with Roses and Uineger tēpered togea∣ther, it helpeth the hed in hotte diseases, the sowthistle called Sonchos hath ye same vertue & so hath Cicory: if they be sodden, the loose the belly & quen∣cheth heat which burneth in the stomacke. and defendeth the head from hot smoking vapoures, and purgeth yellow choller, and rebateth venerous & fleshly heat, & is good to be sodden & dronk in hote burning Agues: though this herbe be commonly knowen and counted of many as a vile wede, yet it is reported of Dioscorides to be an excellent herbe, & is called Lyons teeth.

TAke a handfull of fennell roots, as much persly roots, as many Alisander rootes, halfe a handfull of Borrage rootes, and put out the pith of all the saide rootes, then take halfe a handfull of Peniryall, as much of Uiolet leaues, and as much of cinckfoyle, as much Succary, Endiue, Holly hocke leaues, Mallow leaues, and redd gardene mints, of all these the like quantitie as of these next before, halfe a handfull of Lico∣ris sticks scraped, brused and beaten to fine powder, a gallon of faire running water, boyle therein all these simples, and boyle these séedes with them, that is, thrée spoone∣full of Anniséeds, as much Fennell seede, the like of Colliander seede and Commin séede, a good handfull of Dandelion rootes, and so boyle altogether from a gallon to a pottell, and let the patient drinke thereof first and last, and it will helpe him in short space. probatum est.

If you are looking for a free, period green to use in a salad, or in a dish of wortys, some may need look no further than the backyard. Please be sure if you are picking dandelion greens, that the area you are picking from has not been sprayed with herbicides or pesticides. I have known dandelion’s to stay green and growing in even the mildest of winters. A good dish for the SCA to try them would be “Buttered Wortes, found in Harliean MS 279, published approximately 1430.

Buttered Herbs. Take all manner of good herbs that thou may get, and do by them as is aforesaid; put them on the fire with fair water; put thereto clarified butter a great quantity. When they are boiled enough, salt them: let no oatmeal come therein. Dice bread small in dishes and pour on the herbs, and serve them forth.

Buttered Herbs – Makes about 4 Cups serves 6-8 (this is probably more than enough for two tables of 8 at any feast- it is a vegetable. Use your best judgment)

Bring the water to a boil in a pot. Rinse all greens and herbs well and place them in the boiling water for 5-1o minutes. Remove from heat. Take the greens and herbs out of the pot with a slotted spoon. Allow them to cool on a cutting board. When cool, press them with a paper towel or absorbent cloth to remove the excess water. Chop them into small pieces and place them in a clean pot. Add butter and salt. Mix well. Cook the mixture over medium heat until hot. Do not boil. Either pour the hot herb mixture over bread cubes in a serving dish, or top the herbs with the bread. Serve hot.

Name.umdl.umich.edu. 2020. Bulleins Bulwarke Of Defence Against All Sicknesse, Soarenesse, And Vvoundes That Doe Dayly Assaulte Mankinde: Which Bulwarke Is Kept With Hilarius The Gardener, [And] Health The Phisicion, With The Chirurgian, To Helpe The Wounded Soldiours. Gathered And Practised From The Most Worthy Learned, Both Olde And New: To The Great Comfort Of Mankinde: By Vvilliam Bullein, Doctor Of Phisicke. 1562.. [online] Available at: <http://name.umdl.umich.edu/A17156.0001.001> [Accessed 6 August 2020].

Name.umdl.umich.edu. 2020. The Good Husvvifes Ievvell Vvherein Is To Be Found Most Excellent And Rare Deuises For Conceits In Cookerie, Found Out By The Practise Of Thomas Dawson. Whereunto Is Adioyned Sundry Approued Reseits For Many Soueraine Oyles, And The Way To Distill Many Precious Waters, With Diuers Approued Medicines For Many Diseases. Also Certaine Approued Points Of Husbandry, Very Necessarie For All Husbandmen To Know.. [online] Available at: <http://name.umdl.umich.edu/A19957.0001.001> [Accessed 6 August 2020].