To Souce and Garnish a Pig (Brawn with Mustard) The Accomplisht Cook, Robert May 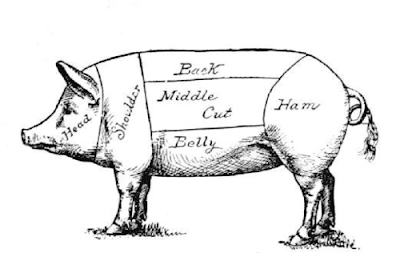 To souce a Pig.

Take a pig being scalded, cut off the head, and part it down the back, draw it and bone it, then the sides being well cleansed from the blood, and soaked in several clean waters, take the pig and dry the sides, season them with nutmeg, ginger, and salt, roul them and bind them up in clean clouts as the pig brawn aforesaid, then have as much water as will cover it in a boiling pan two inches over and two bottles of white-wine over and above; first let the water boil, then put in the collars with salt, mace, slic’t ginger, parsley-roots and fennil-roots scraped and picked; being half boiled put in two quarts of white-wine, and when it is boil’d quite, put in slices of lemon to it, and the whole peel of a lemon.

To garnish Brawn or Pig Brawn.

Leach your brawn, and dish it on a plate in a fair clean dish, then put a rosemary branch on the top being first dipped in the white of an egg well beaten to froth, or wet in water and sprinkled with flour, or a sprig of rosemary gilt with gold; the brawn spotted also with gold and silver leaves, or let your sprig be of a streight sprig of yew tree, or a streight furz bush, and put about the brawn stuck round with bay-leaves three ranks round, and spotted with red and yellow jelly about the dish sides, also the same jelly and some of the brawn leached, jagged, or cut with tin moulds, and carved lemons, oranges and barberries, bay-leaves gilt, red beets, pickled barberries, pickled gooseberries, or pickled grapes.
Interpreted Recipe
Brawn With Mustard

Remove extra fat from the meat, season with nutmeg, ginger and salt, and roll tightly and tie.  Make a brine of salt and water, and allow to sit in brine several hours, but overnight or longer is preferred.
Bring additional water and wine to a boil, rinse your meat and then add it to the boiling water along with the parsley root (or parsnips), fennel root (or fennel seed),  lemon and additional seasonings you prefer.  Make sure that your meat is completely covered by cooking liquid, turn heat to medium low and cook until tender adding water, broth or wine as necessary.
To serve, slice thinly and garnish with red and yellow wine jellies, jagged lemons or oranges, red beets, pickled grapes, fresh grapes, bay leaves, etc.
Note: I have made this using pork butt, and pork shoulder roast. Ideally, it would be made using the loin or belly which make up the "sides" of the pig.
This is a very "fluid" recipe.  Another cook I know, cooks the meat ahead of time and then stores it in the brine, as opposed to brining first and then storing.  I prefer to make ahead and store in the cooking liquid after brining as opposed to cooking first and brining second.