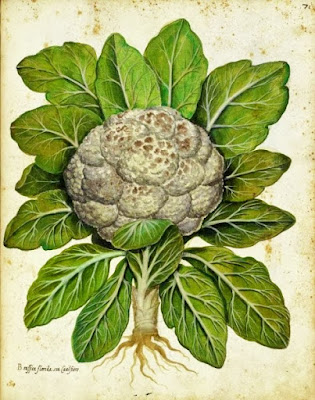 Soops or butter’d Meats of Spinage.
Take fine young spinage, pick and wash it clean; then have a skillet or pan of fair liquor on the fire, and when it boils, put in the spinage, give it a warm or two, and take it out into a cullender, let it drain, then mince it small, and put it in a pipkin with some slic’t dates, butter, white-wine, beaten cinamon, salt, sugar, and some boil’d currans; stew them well together, and dish them on sippets finely carved, and about it hard eggs in halves or quarters, not too hard boil’d, and scrape on sugar.
Soops of Carrots

Peel your turnips and slice them crosswise ¼” thick. Bring the butter, broth, vinegar, and seasonings to a boil in a saucepan and add your turnips. Lower the heat and simmer until the turnips are almost tender, stirring them every 15 minutes.
Buttered Colliflowers
Have a skillet of fair water, and when it boils put in the whole tops of the colliflowers, the root being cut away, put some salt to it; and being fine and tender boiled dish it whole in a dish, with carved sippets round about it, and serve it with beaten butter and water, or juyce of orange and lemon.
Interpreted Recipe
1 pound  cabbage, turnips or cauliflower, cleaned and cut into bite sized pieces
Water
1 pound butter cut into pieces
Sugar to taste
Place turnips (or cauliflower) into a large saucepan and cover with water. On medium-high heat, bring turnips to a boil. Lower heat, cover, and simmer about 30 minutes or until tender. Drain into a colander and set aside.

Bring 4 tbsp. water to a boil, immediately reduce the heat to low and whisk in the butter, one tablespoon at a time. Butter and water mixture will start to emulsify. Once the sauce has emulsified, you can continue to add remaining butter until all butter has been added to the mixture.
To serve: Pour butter over boiled vegetables, sprinkle with sugar to taste.
Note: Sauce may break if allowed to get too warm.
Buttered Wortes (Cabbage),  Two Fifteenth Century Cookery Books, Thomas Austin