I have been quite anxious to try this recipe from Two fifteenth-century cookery-books : Harleian MS. 279 (ab 1430), & Harl. MS. 4016 (ab. 1450), with extracts from Ashmole MS. 1439, Laud MS. 553, & Douce MS. 55 by Thomas Austin for Bolas. It was exactly as I imagined it would be...colorful, flavorful and with a bit of a cheat, exceptionally easy to put together. Additionally, this dish wowed the taste testers when presented.

Ciiij - Bolas. Take fayre Bolasse, wasshe hem clene, and in Wyne boyle hem that they be but skaldyd bywese, and boyle hem alle to pomppe, (Note: Pulp) and draw hem thorw a straynoure, and a-lye hem with flowre of Rys, and make it chargeaunt, and do it to the fyre, and boyl it; take it of, and do ther-to whyte Sugre, gyngere, Clowys, Maces, Canelle, and stere it wyl to-gederys: thanne take gode perys, and sethe hem wel with the Stalke, and sette hem to kele, and pare hem clene, and pyke owt the corys; than take datis, and wasshe hem clene, and pyke owt the Stonys, and fylle hem fulle of blaunche poudere: than take the Stalke of the Perys, take the Bolas, and ley .iij. lechys in a dysshe, and sette thin perys ther-yn.

54 - Bolas - Take fair bullace, wash them clean, and in wine boil them that they be but scalded and steeped, and boil them all to pulp and draw them through a strainer, and mix them with flour of rice, and make it thick, and do it to the fire, and boil it; take it off and do there-to white sugar, ginger, cloves, maces, cinnamon, and stir it well together: then take good pears, and cook them well with the stalk, and set them to cool, and pare them clean, and pick out the cores; then take dates, and wash them clean, and pick out the stones, and fill them full of white powder: than take the stalk of the pears, take the plums, and lay three slices in a dish, and set your pears there-in.

Clean and wash your plums and cut into chunks and place in a pot, along with wine, sugar, ginger, cloves, mace and cinnamon.  Allow to cook until the fruit has softened into a pulp. I used about a teaspoon of pólvora de duque (see below) instead of the individual spices along with additional sugar.

If you are not going to employ the cheat method of using sliced pears that have been canned, poach your pear in a second pot.  I had truly planned on using a small Bosc pear, but it was eaten by one of the family taste testers who didn't realize it was for this recipe~laughs~!!  So a quick run to the closest store yielded caned pears as a quick substitute, otherwise it would have been a further run to get a fresh pear :-/

To poach your pear, peel it, core it and cut it into six slices. Place in a pan with about 1/4 cup of sugar and water to cover.  Bring to a boil and lower to a simmer gently until a knife inserted into the widest part of one of the slices pierces it. Remove them from the pan and allow to cool.  This saves you the extra steps later of coring and slicing after the pear has been poached.

While the pear and plums are cooking, slice your dates in half and fill with your white powder. Set aside until you are ready to plate.

When the plums have softened, place them into a blender and blend until smooth.  Strain the pulp through a strainer into the pot you cooked them in and bring to a low heat.  Add your rice flour and cook until it has thickened, add more rice flour if you prefer a thicker sauce.  I cooked mine to the consistency of cream gravy and it was GOOOD!

To serve, put your plum sauce into the bottom of a bowl, arrange three (or four) slices of your pear in the dish, and place the spice filled dates in between the pear slices.  The final arrangement should resemble a flower.

This was a beautiful dish! I believe I may exercise "cook's preogative" the next time I make it (it is part of a bid I did for an upcoming event so keep your finger's crossed) and add a touch of saffron to the pears when I poach them.  The yellow of the saffron poached pears against the ruby plum sauce should be very regal to look at.

The plums and the pear perfectly complement each other and the spice filled dates, far from being overly sweet add a hint of sweetness that is needed.  The taste testers and I fought over this, each attempting to get one more bite.  This is definitely on the list of things to make again. It was surprisingly easy to put together, and with the exception of filling the dates with the blanch powder and arranging the pears and dates on the plum sauce, could be made ahead of time and put together the day of an event.

This recipe asks for "blaunche poudere".  After my interpretation of .Cj. Eyron en poche was published the question was raised; what is blaunche poudere? It is one of the mysterious medieval spice blends that must have been known in period. I imagined that it would be heavier on the sugar than any other ingredient making it "whiter" then the other spice blends that were used in period. With the question in mind, I set out on a quest to try to discover what "blaunch poudere" is.

I started with what was known. A set of instructions found in Le Menagier de Paris (ab 1393) for fine spice powder:


To understand the instructions for fine powder it is first necessary to understand the system of weights and measures that are being used. In this period of history, the pound was based on the "Apothecary Weight" which is 12 ounces and not the 16 ounces we think of today.

This weight system was not standardized and weights varied from region to region. The Apothecary system was based on the concept of the weight of grain. The grain (weighting approximately 0.065 grams or 0.002 ounces) was the earliest and most uniform unit of measure. This measurement varied by region and culture dependent upon if the weight was the measure of a single grain of barley or a single grain of wheat (1 barley grain weighed approximately 1 1/3 grains of wheat) taken from the middle of the stalk.

With the understanding that the weight of a grain varied depending on which grain was being weighed, I offer my best interpretation of what the modern day US measurement would be.

The spice powder instructions that are found in Le Menagier de Paris refer to a drachma. The drachma is the measure of the weight of the Greek drachma which weighed approximately 52 grains or 2 drams. With this information in mind, the instructions for "Fine Powder" can be interpreted thus:

The resulting powder is pale brown. But, it is much darker then what you would expect from a powder that was described as "white".

So I moved forward and started looking for spice blends that might fit the profile of white powder, by looking at Rupert de Nola's Libre del Coch (ab 1529) which gives instructions for Common Sauce Spices. Amended.


Roughly translated from Spanish to English (thank you Google) this set of instructions can be translated to be:

This set of instructions yielded a mixture of spices that were a dark reddish brown and I believe too dark for "white powder".

Delving further into the Libre del Coch De Nola offered another set of instructions for a blend of spices that might be the elusive "white powder." Certainly the ingredients when fully interpreted would yield a powder that was heavy on the sugar, but would it be "white"?

Roughly translated (again thank you Google) from Spanish to English this set of instructions can be interpreted to be:

Cinnamon half an ounce, cloves half a quarter, and for the lords do not lie down but only cinnamon and sugar a pound if you want it sharp of flavor and for passions of the stomach throw you and little ginger

This mixture of spices, while not completely white, yields a very light tan powder. This is the mixture that I have used in my interpretation for Bolas and is pictured as the powder filling the dates. 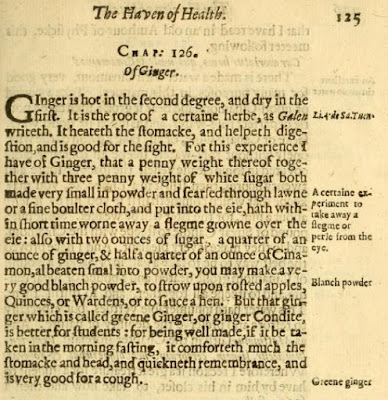 Note: A dry ounce is equal to two tablespoons, or 1/8th of a cup.

My search for the elusive "blaunch poudere" ended when I located a set of instructions in The haven of health Chiefly gathered for the comfort of students, and consequently of all those that have a care of their health, amplified upon five words of Hippocrates, written Epid. 6. Labour, cibus, potio, somnus, Venus. Hereunto is added a preservation from the pestilence, with a short censure of the late sicknes at Oxford. By Thomas Coghan Master of Arts, and Batcheler of Physicke by Thomas Cogan. This book was published in 1636, which puts it into the grey area of period for the SCA. However, Thomas Cogan is documented as having died in 1607. Although I have been unable to locate it, the first edition of The Haven of Health was published either in 1584 or 1586.

GInger is hot in the second degree, and dry in the first. It is the root of a certaine herbe, as Galen writeth. It heateth the stomacke, and helpeth dige∣stion, and is good for the sight. For this experience I have of Ginger, that a penny weight thereof toge∣ther with three penny weight of white sugar both made very small in powder and •earsed through lawne or a fine boulter cloth, and put into the eie, hath with∣in short time worne away a flegme growne over the eie: also with two ounces of sugar, a quarter of an ounce of ginger, & half a quarter of an ounce of Cina∣mon, al beaten smal into powder, you may make a ve∣ry good blanch powder, to strow upon rosted apples, Quinces, or Wardens, or to sauce a hen. But that gin∣ger which is called greene Ginger, or ginger Condite, is better for students: for being well made, if it be ta∣ken in the morning fasting, it comforteth much the stomacke and head, and quickneth remembrance, and is very good for a cough.

This powder creates a very light sandy colored spice mix which is just a touch lighter then the pólvora de duque or Duke's Powder.  I believe if I had used ground cassia cinnamon instead of the regular store bought cinnamon this powder would have been even lighter.  Because of the Cogan's reference to this being "a very good blanch powder", I believe this is the "white" powder that is referenced in Harleian MS 279. 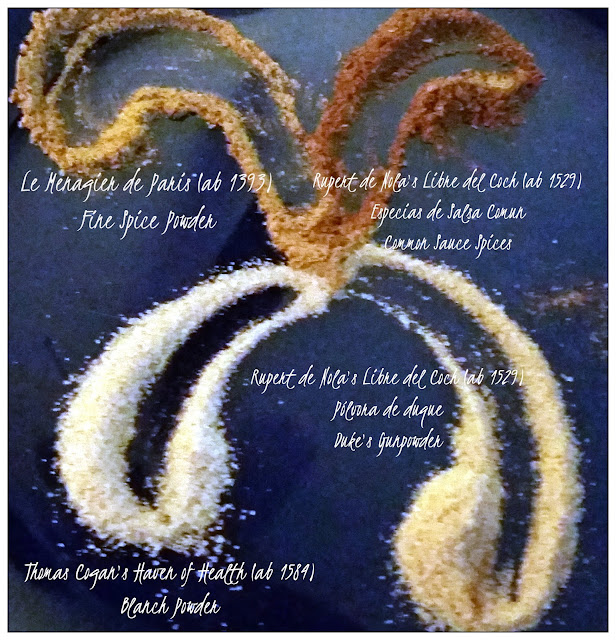