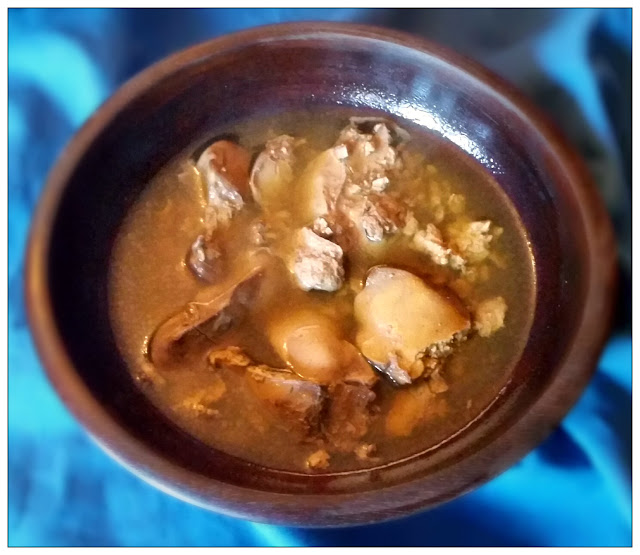 I veered a bit off course recently from the recipes that I was planning on testing, and found myself with two roasting hens and giblets. This prompted me to try a dish from from "Two fifteenth-century cookery-books. Harleian ms. 279 (ab. 1430), & Harl. ms. 4016 (ab. 1450), with extracts from Ashmole ms. 1429, Laud ms. 553, & Douce ms. 55" by Thomas Austin. The dish is (appropriately) named garbage and it consists of those bits of the animal that most of us would not normally eat, but would end up in the garbage. I happen to like offal, the extremities and non-skeletal meat of animals, and was willing to give this recipe a try. I can say that it was not a favorite of the taste testers and they were very good sports about trying this.

As already mentioned, offal is any non-skeletal meat of an animal, this includes blood, brains, caul, ears, eyes, feet, giblets, heads, hearts, intestines, kidneys, liver, lungs, marrow, spleen, sweetbreads, tails, testicles, tongues and tripe. Offal is difficult to keep well, so it must be prepared to be eaten almost as soon as the animal has been slaughtered.

Eating offal has a very long history, but the kinds of offal that are eaten and the types of offal eaten are cultural based. Dietary law also restricts the usage of offal. We tend to be a bit squeamish about eating some parts of the animals (head, eyes, testicles and wombs or udders) because they remind us of our food sources or are too strong in taste (Kidneys, gizzards, livers).

.xvij. Garbage. — Take fayre garbagys of chykonys, as J^e lied, J^e fete, ]ie lyiierys, an ]>e gysowrys ; washe hem clene, an caste hem in a fayre potte, an caste }7er-to freysshe brothe of Beef or ellys of moton, an let it boyle ; an a-lye it wyth brecle, an ley on Pepir an Safroun, Maces, Clowys, an a lytil verious an salt, an serue forth in the maner as a Sewe.

xvij - Garbage. Take fayre garbagys of chykonys, as the hed, the fete, the lyuerys, an the gysowrys; washe hem clene, an caste hem in a fayre potte, an caste ther-to freysshe brothe of Beef or ellys of moton, an let it boyle; an a-lye it wyth brede, an ley on Pepir an Safroun, Maces, Clowys, an a lytil verious an salt, an serue forth in the maner as a Sewe.

17 - Garbage - Take fair garbage of chickens, as the head, the feet, the liver, and the gizzard; wash them clean, and caste them in a fair pot, and caste there-to fresh broth of beef or else of mutton, and let it boil; and mix it with bread, and lay on pepper and saffron, mace, cloves, and a little verjuice and salt, and serve forth in the manner as a stew.

Interpreted Recipe Serves 1 as main, 2 as side


This was very easy to put together. I retained the giblets from two roasting chickens and then added additional livers. Be sure to clean your gizzards, removing the silverskin as it is inedible. Cook the giblets in the broth, with pepper, saffron mace and clove. While the meat is boiling you will want to soak the bread crumbs in the vinegar, it will become a kind of paste. Once the meat is cooked remove it from the broth and cut it into smaller pieces. Add the breadcrumbs soaked in vinegar a little bit at a time to the broth, and boil until it is thickened to your taste. Return the meat to the gravy, and season with the salt. Serve.

Unfortunately, I think this dish is going to be added to the "too period to serve" list. It was good, if you like to eat offal. I do, so I enjoyed it. However, several of my taste testers are not, and voiced a very loud "NO" when asked if they would try it at a feast. That being said, this could be a "found" dish that can be served at an event if you are using whole roasting chickens. There is no reason to throw out the giblet bags, serve it up like this. Adventurous feasters will try it, and you might find someone like me who enjoys offal, who will gobble up as much as they can get.

To make false guernon - If you want to make false guernon take the livers and the gizzards, then chop small, grind bread and temper with broth, and put to boil, and after add beaten egg yolks and saffron, temper with wine, and then fry, and add milk, and chop meat in the crest, and put to boil, and stir all day, and then add the eggs and saffron, and mix in a bowl, and add ground cinnamon, ginger and cloves thereon.

To mak a garbage tak the heed the garbage the leuer the gessern the wings and the feet and wesche them and clene them and put them in a pot and cast ther tobrothe of beef poudere of pepper clowes maces parsly saige mynced then step bred in the sam brothe and cast it to pouder of guingere venygar saffron and saltand serue it.

Garbage. Tak fleysch & wasch it & do it to the fyer take percely & brek yt with thin honds & do in spices and saffron & wyn let it boyle wel non other lite but salt

To make a subbelet for organ meats [usually liver and stomach] of the goose or for venison or for meat of a wether. Take bread softened in the broth and ground up then passed together through a strainer and put it in the pot, then add to it wine, a little vinegar spices that belong to it and saffron with salt. Then let this all boil well together; so you shall lay it in the salted organ meats. So it is done.