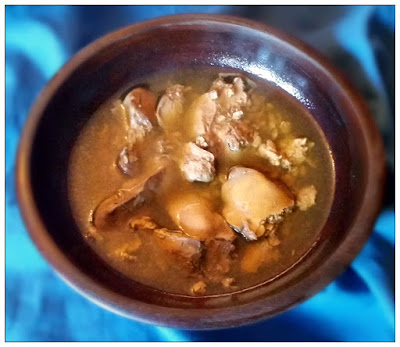 Fryer chickens went on sale ($.68/pound) right after Thanksgiving. I purchased 16 of them and much to my surprise on the day I was butterflying them I discovered that they came complete with neck, gizzards, liver and heart. Joy! A "found dish" within the already purchased ingredients that I could offer at the event for those brave enough to try it. I did purchase (on sale) an additional package of livers, gizzards and hearts, and chicken feet.

I have to chuckle because at this particular event, the diner's got to enjoy mortis (mortrews), entrails (trayne roast), compost (pickled vegetables) and garbage (offal) all while being entertained with a boar's head. I'm not sure if anyone else realized it or if I have just let the cat out of the bag, but 12th night had a bit of an accidental darker theme going on :-D

xvij - Garbage. Take fayre garbagys of chykonys, as the hed, the fete, the lyuerys, an the gysowrys; washe hem clene, an caste hem in a fayre potte, an caste ther-to freysshe brothe of Beef or ellys of moton, an let it boyle; an a-lye it wyth brede, an ley on Pepir an Safroun, Maces, Clowys, an a lytil verious an salt, an serue forth in the maner as a Sewe.

17 - Garbage - Take fair garbage of chickens, as the head, the feet, the liver, and the gizzard; wash them clean, and caste them in a fair pot, and caste there-to fresh broth of beef or else of mutton, and let it boil; and mix it with bread, and lay on pepper and saffron, mace, cloves, and a little verjuice and salt, and serve forth in the manner as a stew

Clean your offal; this means rinsing away blood, cutting gizzards in half and removing anything you find inside of them (it's part of the digestive system and you -don't- want to eat that!), trim away the lining of the gizzard, trimming fat, green parts and membranes from the livers, remove connective tissue from hearts, wash the feet, peel if you want (I didn't), clip the toes if you want (I didn't). Make sure that you clean and sanitize your work surface after. Offal is delicious but it does carry a higher risk of contamination.

Place all ingredients in a pot, bring to a boil, turn down to a simmer and cook until tender. I have to confess that I treated the garbage like I treat a stock and simmered this for about six hours after which I served. What I discovered is the livers mostly disappear, they cook away to almost nothing, flavoring the broth.

Those who tried it loved it, and someone took home the left overs. If rumor is true, chicken feet were a much sought after commodity.
Email Post
Labels: 12th Night 279 English Feasts First Course