Continuing the journey in "Two fifteenth-century cookery-books. Harleian ms. 279 (ab. 1430), & Harl. ms. 4016 (ab. 1450), with extracts from Ashmole ms. 1429, Laud ms. 553, & Douce ms. 55" Thomas Austin, specifically pottages and a series of milk based custards, I was delighted to interpret this recipe for an unusual custard that starts by soaking bread in cream or milk. This recipe is the closest to the "unwholesome mixture of bread and milk" that was described when I was researching the history of baby for the papyns article.

My non-SCA taste testers and I really enjoyed this recipe. I have made Constance Hieatt's version from "The Ordinance of Pottage" for several feasts in the past and it has always been well received.  The tastes are similar to each other, the texture creamy, sweet, and luxurious.  You could say it is one of my "Go To" recipes because you can make her interpretation in the microwave prior to an event and it will keep well refrigerated overnight.

This recipe includes bread as a thickening agent as well as eggs. It is a very thrifty dish for the medieval cook, because it most likely made use of bread that had gone stale and it was a way to preserve milk that would otherwise have gone bad, or may have been put to other use. Bread played such a large role in the medieval household that an assize law was created to regulate the weight, quality and price of bread. The law was effective from the Reigns of Henry II (December 1154 to July 1189) through Edward II (July 1307 to January 1327).

At the time of the Assize of Bread, the Roman pound, also known as Troy pound, would have been in use. Unlike the pound we are used to, the Troy pound was divided into 12 ounces. It is interesting to note that at one point, the weight of single or multiple grain(s) of barleycorn, also known as grains, were used as a measurement for both weight and distance. Visit English Customary Weights and Measures for more information.

The bread refered to in the recipe below is "paynemayne" another name for pandemain, from the Latin "Panis Dominicus" or "Lord's Bread". The earliest reference to pandemain can be traced to Geoffrey Chaucer's "Canterbury Tales" approximately 1390. Pandemain was very well sifted, high quality bread reserved for nobility.

.xiij. Creme Boylede.—Take creme or mylke, & brede of paynemayn, or ellys of tendyr brede, an breke it on þe creme, or elles in þe mylke, an set it on þe fyre tyl it be warme hot; and þorw a straynour þrowe it, and put it in-to a fayre potte, an sette it on þe fyre, an stere euermore: an whan it is almost y-boylyd, take fayre ȝolkys of eyron, an draw hem þorw a straynowr, and caste hem þer-to, and let hem stonde ouer the fyre tyl it boyle almost, an till it be skylfully*. [reasonably.] þikke; þan [leaf 8.] caste a ladel-ful, or more or lasse, of boter þer-to, an a good quantite of whyte sugre, and a litel salt, an þan dresse it on a dysshe in maner of mortrewys.

13. Cream Boiled - Take cream or milk and bread of pandemain, or else of tender bread, an break it on the cream, or else in the milk, an set it on the fire till it be warm hot; and through a strainer throw it, and put into a fair pot, an set it on the fire, an stir evermore: an when it is almost boiled, take fair yolks of eggs, and draw them through a strainer, and cast them there-to, and let them stand over the fire till it boil almost, an till it be skillfully (reasonably) thick; than cast a ladle full, or more or less, of butter there-to, and a good quantity of white sugar, and a little salt, and then dress it on a dish in manner of mortrews. 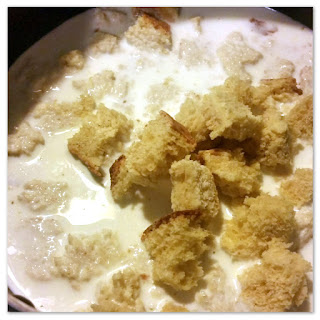 cream. Once the bread has soaked, use the back of a spoon to break it up into smaller pieces while heating it to a simmer. Do not let it come to a boil. Strain the bread from the milk --don't skip this step, otherwise your custard will be lumpy which is not very pleasant.

Return the strained milk to your pan and add in the eggs, sugar and salt. Keep your heat low, if the mixture becomes too hot the eggs will curdle and there is no saving it at that point--voice of experience speaking. Instead of a velvety, luxurious custard you get sweet scrambled eggs, not bad....but not what you were wanting. Stir constantly until the cream thickens. Strain the custard into another dish before serving.

To serve in the manner of "mortrewys" you would cut slices of bread and toast them, and set them around the bowl before serving. I personally skipped this step and opted to decorate my custard with beautifully red pomegranate seeds.

This is a very fussy dish to make, and I think if I were to serve it at a feast it would be a dish I made in small batches ahead of time. You do not want a novice trying to make this for the first time at an event site. Make sure whoever works with this recipe has experience working with custards, or opt to use Hieatt's microwaveable version which I have posted below. If you do opt to use this recipe and make it ahead of time be sure to "seal" the custard with plastic wrap that touches it so that a skin does not develop on top of it.

Take swete creme of melke; do hit in a pott. Do therto buttur claryfyed. Set hit on the fyre; stere hit. When hit boyles, have yolkes of eyron drawyn thorowgh a streynour into a bole, & put boylyng crem thereto with a ladyl. Styr hit well for quallyng, & put hit in the pott ayen; & yf be nede, yeve hit a lytyl more of the fyre. Loke hit have a white sygure ynowghe, & of the bature also loke hit be standyng as mortruys; & colour hit with safron. Loke hit be salt. Mess hit forth, and strew on poudur of gynger.

Start by scalding the cream in a large glass measuring cup at full power for 2 minutes. Meanwhile, beat the cheese, eggs, etc. together with a wire whisk in a 1-quart cassrole. Stir the scalded cream gradually into this. Cover the casserole and put it in the microwave at low power for 12 minutes, rotating the dish half a turn after 7 minutes. Do not stir, during or after.

The center should be not quite set when the dish comes out of the oven; it will become firmer while standing. While it is cooling, have a paper towel between the rim of the dish and the cover to absorbe\ excess moisture.

Serve in large spoonful's from the casserole. Texture and consistency are something like soft ice cream.

Hieatt, Constance B. "An Ordinance of Pottage". Prospect Books, 1988

To mak creme buile tak cow creme and yolks of eggs drawe and well bet that it be stonding and put ther to sugur and colour it with saffron and salt it then lesk it in dyshes and plant ther in floures of borage and serue it.