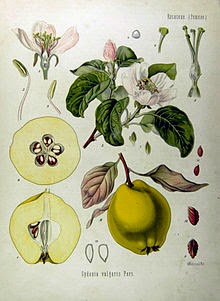 What is Quince? The quince is a member of the Rosaceae family, which also includes apples, pears, apricots, plums and roses. It is one of the earliest known cultivated fruits and appears in many medieval recipes.

Recipes for quince can be found as early as the first century. Dioscorides suggests that quinces which have been peeled and have had their pips removed should be placed into a container as tightly as possible. The container should then be filled with honey and allowed to sit. After approximately a year the fruit will become soft. This was called melomeli, or apple in honey (Wilson, 1985).

The Greeks referred to quinces as Cydonian Apples. In the fourth century, recipes for cidonitum appear. To make this thick spiced jellyish preserve quinces are either peeled and boiled in honey, seasoned with ginger and pepper or they are boiled in a mixture of vinegar and the aforementioned spices and then cooked to the consistency of honey (Wilson, 1985).

It is most likely these earliest forms of preserved quince that became the Elizabethan Chardequynce.

.xxxiv Chardewardon –Take Pere Wardonys, an seethe hem in Wyne or in fayre water; than take an grynd in a morter, an drawe hem in a potte with Sugre and clarifiyed hony, an canel y-now, an lete hem boyle; than take it fro the fyre, an let kele, an caste there-to yolkys of Raw eyroun, tylle it be thikke; & caste ther-to pouder Gyngere y-now, an serue it in manere of Fysshe; an if it be in lente, lef of the yolkys of Eyroun, and lat the remenaunt boyle so longe tylle it be thikke, as thow it had be temperyd wyth the yolkys, in the maner of charde quince; an so serue hem in manner of Rys (Austin, 1996)

Chardquince – Take quinces and divide in four pieces with a knife, and take the flesh separated from the pips and boil it in a pan with clear water until it is very soft, then remove from the fire and strain through the middle of a strainer or sieve; and if there are 8 pounds of flesh, add 6 pounds of clarified honey, and put it over the fire and let it boil stirring continuously until it is completely cooked, and test it in this way: take a knife, and take some of the mixture on the point of the knife and let it cool, if it is stiff, then it is cooked enough. Then remove from the fire and stir well until it begins to turn white; then add two pounds of eringo powder, 3 ounces of ginger, very finely chopped, and 6 ounces of ground ginger, and put all this combined into boxes and keep until needed.

And this way you can make Chardewardon (pear paste), Chardecrab (crab apple paste) and Chardedate, but the dates shall be ground in a mortar and not cooked, and the honey shall be cooked until it sticks hard between the fingers, and then put in the dates, and if you want to prepare it with sugar, put to one pound of pulp 2 pounds of clarified sugar, 2 ounces of spices as stated above, except that you do not put in eringo powder (Hieatt, 2013)

This past week I made quince paste and rosewater quince jelly. My observations are that the quince tastes a bit like a cross between an apple and a pear. While you are cooking the quince it is extremely fragrant and perfumes your entire house with the delicate scent of apples and pears cooking. As this was my first time working with the quince, I opted for a much simpler recipe, then the historic ones. I was excited to find these recipes because it occurred to me as I was reading the historic ones that the liquid the quince was cooked in could have been made into a jelly and it appears that it was simply thrown away! I am quite pleased with my first steps into working with quince, and I do have plans to revisit the more period recipes in the future.

The link to the recipe I used is here: Quince and Rosewater Jelly and Quince Paste

The results are pictured below: 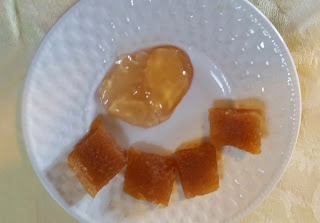 What would I do differently? I really enjoyed this recipe, it was simple, easy and the results are quite delicious. However, I do think I need to learn how to convert metric to US measurements for cooking. The jelly is very soft and not quite what we think of when we think of jelly. In fact, when I first canned it up (my results were three pints of golden amber jelly), I likened it to "honey that had been heated up".

I would use less rosewater in the jelly. The rosewater that I used is very assertive and it overwhelms the much more delicate flavor of the quince.

Also, I let the paste dry in my fridge for several days before cutting into it. I cannot wait to try the paste flavored with ginger, I bet it will be fantastic!


Wilson, C. (1985). The Book of Marmalade; Its Antecedents, Its History and Its Role in the World Today Together with a Collection of Recipes for Marmalades & Marmalade Cookery. New York: St. Martins Press/Marek.