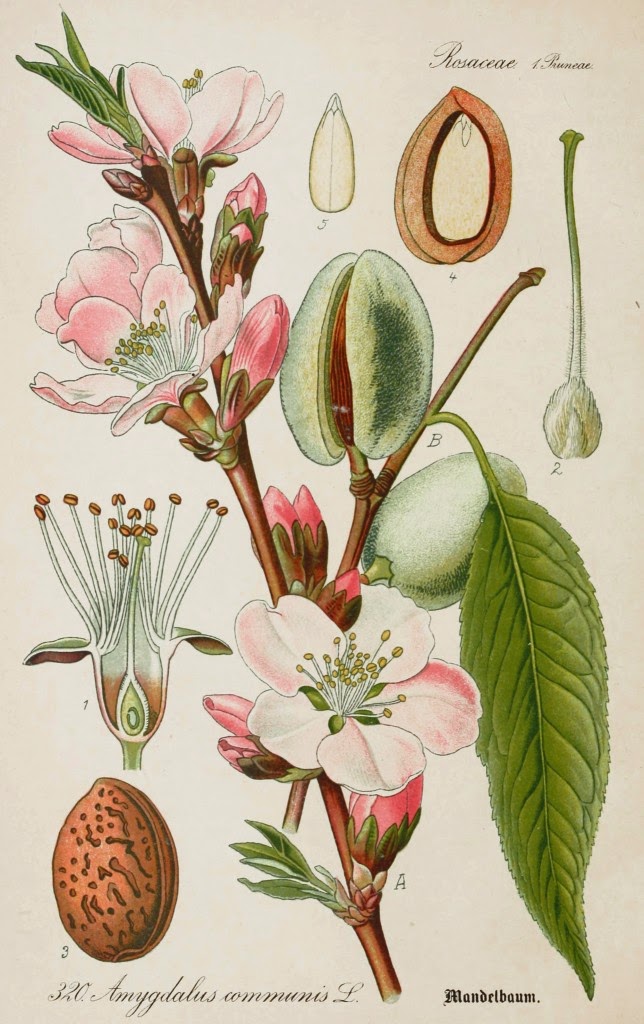 During times of Lent, or on fasting days, it was forbidden to eat milk, meat or egg products during the middle ages. For approximately 1/3 of the year, the idea of big haunches of meat being served to the upper class in overabundance is simply untrue. Sumptuary laws also limited what could be eaten. Almonds became an important part of the meal, and indeed, many recipes that one can find in cookbooks are laden with terms such as "drawe your almond milk thick" or "mak good almounde mylk of blaunchyd almoundes". They also specify if a particular dish to be served is for "lent", using terms such as "and if it be Lent".

One of the most basic ingredients in medieval cooking is almond milk. This was such a common ingredient in cooking that the recipe per se was not written down. It was an assumption that all cooks new to do this. Harleian MS 279 gives these instructions for making almond milk.

11. Cold Almond Milk. Take black sugar, an cold water, and do them to in a fair pot, an let them boil together, and salt it an skim it clean, an let it cool: Then take almonds, an blanche them, clean, and stamp them, and draw them, with the sugar water thick enough, into a fair vessel: an if the milk be not sweet enough, take white sugar and cast there-to.

Froyte de almondes. Take blak sugur and cold water, and caste the sugur and ])e water in a potte ; and lete liera boile togidre, and salt, and skeme hem clene, and let hit kele ; And j^cu take Almoudes, and blanche hem clene, and stampe h(!m in a morter al smal, and drawe hem thik ynowe thorgh a streyno?/r with sugur water, into a faire vesseH. And if hit so be j^at the mylke be not swete, take white sugwr and cast thereto ; And serue hit forth in manor of potage, And namly in lentoii tyme (Internet Archive).

Cold Almond Milk. Take black sugar and cold water and caste the sugar and the water in a pot; and let boil together, and salt and skim him clean, and let hit cool; and then take almonds and blanch them and clean and stamp them in a morer all small, and draw them thick enough through a strainor with sugar water into a fair vessel. And if it so be that the milk be not sweet, take white sugar and cast thereto; And serve it forth in manner of potage, and namely in lenten time.

Take the crushed sugar or, if not, take the purified honey, put it in the water. Put on fire and boil, carefully removing noise, aside from the heat and let cool. Then clean the almonds, put it in a mortar and thou shalt finely, mix with the water. Take brokyn sugure or for fawte ther of take claryfied hony and put hit into fayre water And set hit on the fyre and boyle hit and skymme hit clene and set hit be syde the fyre and let hit cole and then blanche thy almondys cast them yn a morter and bray them small temper hem up with þe same water (MS. Pepys 1047).

Recipes for almond milk can be found in abundance by conducting an internet search. My personal favorite is the following:

Start with raw almonds, at least a cup. Soak them overnight in hot water, or, for a minimum of 8 hours. . You can rub the skins off of them or leave them on as you wish. Place the almonds in a blender with 4 cups of water and blend until a smooth puree. Strain through a cloth. Sweeten the milk to taste using honey or sugar.

The process cannot be simpler. Place your almonds and your water into a blender and blend until the mixture becomes creamy. For a thicker almond milk, use more almond flour. I strain this milk before I cook with it, however, if I am using it to make a smoothy--I use it just like it is.