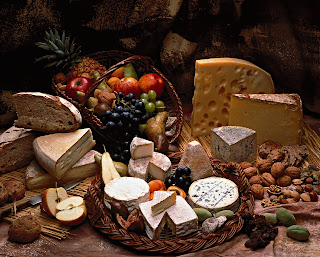 Cheese & Nuts
While researching dietary theory, specifically 15th century England, and brainstorming ways that the theory could be applied to modern day feasts specifically for SCA events, I learned that it was customary to serve later in the meal ripened or hardened cheeses (especially after meat) and nuts (after fish). Since I had served both at this event, I put together a "dessert" plate of cheeses, dried fruits and nuts.