Some of my earliest adventures in attempting to interpret recipes from "Two fifteenth-century cookery-books. Harleian ms. 279 (ab. 1430), & Harl. ms. 4016 (ab. 1450), with extracts from Ashmole ms. 1429, Laud ms. 553, & Douce ms. 55" by Thomas Austin were one of my favorite childhood treats, custards. Today I present to you a selection of my favorite interpretations.  I hope you enjoy them as much as I do.

xxix Milke Rostys- Roasted Milk -- Hard custards are a thing of the past, but this recipe has returned them to my life. Custard is set like cheese, sliced and fried in grease (roste it on a Greddelle). This was my very first interpreted recipe, and is a favorite, served cold, room temperature or hot off the griddle. 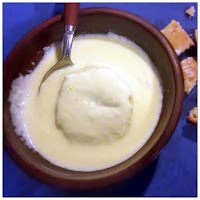 .xxix. Lyode Soppes- an early bread pudding -  literally a sop of bread floating in a pool of beautifully thick and sweet custard, this dish is one of the earliest recipes for "bread pudding." It lacks many of the characteristics that now define a bread pudding, additional fruit, spices, and being baked in the oven.  I was unsure how this dish would be received by my bevy of taste testers, and they received it much better than I expected they would. There were a few surprised looks as they tested this dish. The general consensus amongst the tasters is "it was good but not something they would want to try again"--and they have. 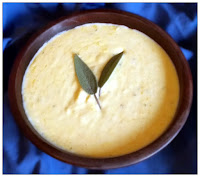 lxxiiij - Arbolettys - Cheese Soup - A luxuriously velvety cheese soup worthy to be served to any king! Simple ingredients of milk, butter, cheese and eggs flavored with sage, parsley, ginger and galingale. Delicious! Caveat: My interpretation is very different from many of my contemporaries who interpret this dish as a scrambled egg dish. Being in the center of a series of dishes that should be cooked in pots, and not being instructions to let the eggs curd let to my unusual interpretation. 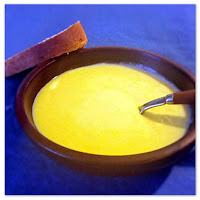 xx. Papyns.- When noble women of this period would choose not to breastfeed, or were unable to, and a wet nurse was not available, a mixture of broth, water, milk, grain, flour or bread, sweetened with honey or diluted wine would be fed to infants through a small horn with a hole drilled into it, or via a rag soaked in the liquid. This same pap was also fed to the elderly who were unable to chew any longer. When given to older children, or in addition to breast milk, papyns provided additional nutrition. This particular recipe adds eggs to the milk and flour as an additional thickener. 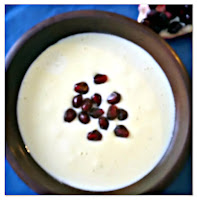 .xiij. Creme Boylede. I was delighted to interpret this recipe for an unusual custard that starts by soaking bread in cream or milk. It is a very thrifty dish for the medieval cook, because it most likely made use of bread that had gone stale and it was a way to preserve milk that would otherwise have gone bad, or may have been put to other use. This blog post includes a bonus recipe--Constance Hieatt's boiled cream custard, from a similar interpretation that can be made in the microwave and is my "go to" feast custard when I cater.
Email Post
Labels: 15 279 Cheese Eggs Milk Pottages SCA