I came across an unusual recipe from Two fifteenth-century cookery-books : Harleian MS. 279 (ab 1430), & Harl. MS. 4016 (ab. 1450), with extracts from Ashmole MS. 1439, Laud MS. 553, & Douce MS. 55 Thomas Austin called "A potage on fysshday".  I confess I was hesitant to try this dish because I was uncertain of what the final results would be.  I asked two chef friends of mine what they thought it should be like.  There was a general agreement that the acidic qualities of the ale and the wine would make this a kind of cheese, so all that remained was to try it.  I should know by now not to doubt those long ago chef's, as the final results were good. 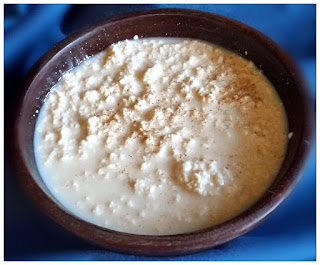 I would not recommend this dish for any large gathering of people but it would be a very cool and period thing to perhaps enter into an SCA competition, or to serve with a gathering of close friends, or even a small luncheon.  The result was a sweet broth made from the wine and the whey, with the curds of cheese (in my case similar to small curd cottage cheese) floating in the broth. Originally, I tried to serve this dryer rather than wetter, and in the humble opinions of all of the taste testers this really needs the broth, the wetter the better!

Possets were very popular dishes to eat, and I can understand why.  Without a way to refrigerate milk, you needed to change it in some way that would extend its life.  I was unable to locate directions on how to make a medieval posset.  I did find instructions from Sir Kenelm Digby.

"A Plain Ordinary Posset: Put a pint of good Milk to boil; as soon as it doth so, take it from the fire, to let the great heat of it cool a little; for doing so, the curd will be the tenderer, and the whole of a more uniform consistence. When it is prettily cooled, pour it into your pot, wherein is about two spoonfuls of Sack and four of Ale, with sufficient Sugar dissolved in them. So let it stand a while near the fire, till you eat it." -- from "The Closet of the Eminently Learned Sir Kenelm Digby, Knight, Opened" (ca 1669)"


One of my chef friends was able to point me to two recipes from the mid 1800's for possets.  This has very little variation from Digby's recipe. I have to confess, there were a lot of remarks about "Little Miss Muffet" and how I had just created medieval curds and whey. That is exactly what this dish is.  The taste testers and I enjoyed it. I believe this is a dish that would do well room temperature as well as hot.  There wasn't any left over to test if it would be good cold.  I would definitely serve this as an alternate soup to vegetarians at an event provided they eat milk, when serving a meat based soup. It is thrifty and cost effective but a bit labor intensive.

.l. A potage on fysshday.—Take an Make a styf Poshote of Milke an Ale; þan take & draw þe croddys þorw a straynoure wyth whyte Swete Wyne, or ellys Rochelle Wyne, & make it sum-what rennyng an sum-what stondyng, & put Sugre a gode quantyte þer-to, or hony, but nowt to moche; þan hete it a lytil, & serue it forth al a-brode in þe dysshys; an straw on Canel, & Gyngere, and ȝif þou [supplied by ed.] haue Blank powder, straw on and kepe it as whyte as yt may be, & þan serue forth.

l - A potage on fysshday. Take an Make a styf Poshote of Milke an Ale; than take and draw the croddys thorw a straynoure wyth [correction; sic = MS. with wyth .] whyte Swete Wyne, or ellys Rochelle Wyne, and make it sum-what rennyng an sum-what stondyng, and put Sugre a gode quantyte ther-to, or hony, but nowt to moche; than hete it a lytil, and serue it forth al a-brode in the dysshys; an straw on Canel, and Gyngere, and 3if thou haue Blank powder, straw on and kepe it as [correction; sic = a] whyte as yt may be, and than serue forth [correction; sic = f].

50 A Potage on Fish Day - Take and make a stiff posset of milk and ale; then take and draw the curds through a strainer with white sweet wine, or else Rochelle wine (a favored kind of white wine in the middle ages), and make it somewhat running and somewhat standing, and put sugar, a good quantity there-to or honey, but not too much; then heat it a little and serve it forth all abroad in the dish; and strew on cinnamon and ginger, if you have white powder, strew on and keep it as white as it may be, and then serve forth.

Bring the milk and the honey to a boil and remove it from the heat.  Allow to sit five minutes to cool, and add the Ale and white wine.  Return to heat and simmer for approximately ten minutes stirring constantly.  You can strain the whey from the curds if you like, otherwise add ginger, cinnamon or pouder douce to taste, and serve.