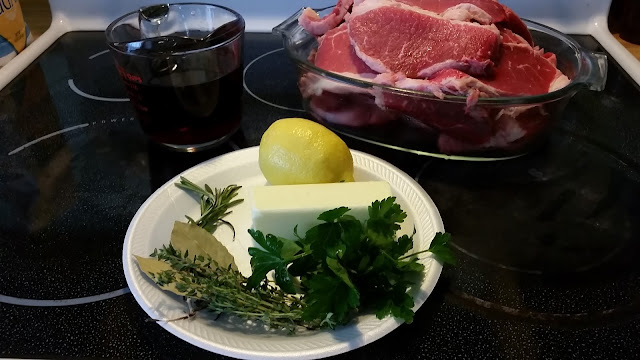 In June, I hosted a cook's gathering featuring a selection of dishes that would have been found on "Shakespeare's" table. Each of the cook's that attended chose a dish from the recipes presented and brought it with them. We dined that night on buttered eggs, french bread, stewed fillets of beef, Fridayes pye and a berry cream.

The beef was delicious, tender, and served over a bed of saffroned rice. I cooked it in a crock pot. It recieved rave reviews. I don't cook with salt or pepper if I can avoid it, so the major comment of the evening were that this dish would have been better if I had added some salt and pepper while cooking. Note to self: Add Salt and Pepper!

To stew Fillets of Beefe

Take a rawe fillet of beefe and cut it in thin slices halfe as broad as your hand and fry them till they bee halfe fried in a frying-panne with sweete butter uppon each side with a soaft fire, then powre them into a dish or pipkin putting in a pint of claret-wine, a faggot of sweet herbes, and two or three blades of whole mace, a little salt, the meate of a Lemon cut in slices, then stewe these all together very softly for the space of two or three houres till it be halfe boyled away, then dish it up on sippets and throwe salt upon it, and serve it to the table hot  John Murrell "A Booke of Cookerie" (Lorwin, 1976).

Fry the slices of beef in the butter (if you wish, add olive oil to keep butter from burning). Remove from the pan until the all of the meat has been cooked thoroughly. Add meat back into the pan and add remaining ingredients. Allow meat to simmer two to three hours, or until liquid has been reduced by half and meat is tender.


I have included some pictures of the product in process, but silly me! I forgot to take a picture of the finished product. This was a huge hit at the gathering and I will be making it again in the future for an event. Probably 12th Night in January.