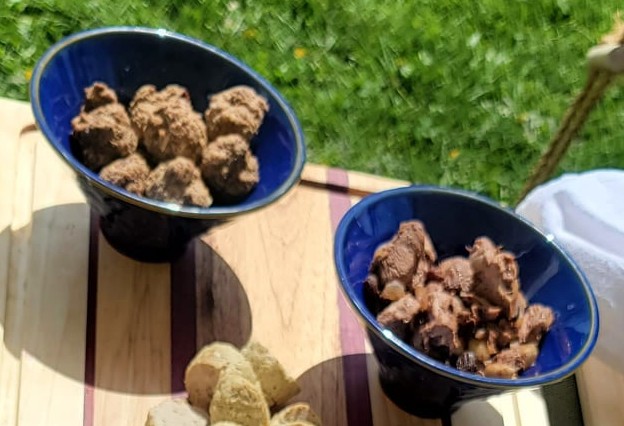 As you can see, I had originally worked on translating this recipe in anticipation of the 12th Night event that did not happen.  I found it such a unique dish, I wanted to bring it to Appolonia's Vigil.  It was quite popular.  And will be making an appearance at a future event.

Slightly disappointed that what I thought was cheese soup (Käeßsuppen does mean cheese soup just ask google!!) but was more of a spread to go on bread, I thought I needed to "round out" the first course of the 12th Night feast with a meat cooked in a broth, or a soup like substance :-/.  To be fair, the cheese sops, the fennel and bacon savory pastries, smoked neat's tongue, various sausages & mustard, pickled vegetables and pears in syrup should be enough! However, I want to offer something for individuals who may not be interested in trying the pork or beef dishes. I really need a "chicken" dish.

Fortunately, I don't need to make a lot of this dish to satisfy the nibbley-appetizer part and this does fit the very definition of something to be served to open the stomach--it is vinegary, and contains warm spices! Perfecto!

I think on first look, people would be turned off by the idea of a "pickled chicken". I was and I had bypassed the recipe in my search for that "little something else" before actually looking at the ingredients.  I had cooked something similar before for a private dinner!! Chicken Ambrogino with Dried Fruit from "The Medieval Kitchen; Recipes from France and Italy" by Odile Redon, Francoise Sabban & Silvano Serventi--it is absolutely delicious, and should be served again at a future date.  Voila!

According to the author's, this dish falls into the category of escabeches- dishes that are marinated in vinegar and spices used for preserving meat, fish or vegetables.  No wonder it is referred to as "pickled".  I must admit, that having cooked to great success a similar dish, I did not do a lot of testing of this recipe. I know that the portions presented in the previously mentioned cookbook appeal to modern tastes, so I pulled it down and am using a similar method for this dish.  There are some things that are present in the Chicken Ambrogino not found in this dish, for example, the bread that thickens the sauce.  I may need to do a bit more cooking down of the sauce to form the syrup.

Take raisins, onions, almonds, vinegar and wine, cut the chickens into three parts, put them into the pickle, spice them and serve.

Ingredients
3-4 Chicken breast and thighs cut into chunks
1/2 cup Raisins
1 large Onions
1/2 cup Almonds
3 tbsp.  Red Wine Vinegar added to 1/2 cup chicken broth
1/4 cup Red Wine
For Spices; 1 tbsp. fine spice powder.
I'm cutting the chicken into manageable chunks instead of leaving it whole as this will be an appetizer served alongside roasted neat's tongue, and sausages so it needs to be easily skewearable.  The plan is simple, mix all ingredients together and cook in a pot until the chicken has cooked through, and the sauce has thickened up. Note: I may need to add more liquid to this, and if so I will simply double it up, but I have no idea at this point how much "sauce" will be needed for that amount of chicken to "stew" properly.  Serve.
Addendum: I cooked the sauce down till the pot was dry.  The chicken grabbed onto the flavors of the dish.  This was a great "make ahead" dish, that was delicious cold.
Email Post
Labels: 12th Night Appetizer German Meat Vigil