Found in Recipes from Anna Wecker’s Köstlich New Kochbuch (1598) this recipe for a marchpane made with quince sounds divine, and so it must be tested.  I have made marchpanes previously for a 12th Night feast, and was eager to try something a little different for this one.

A delicious marcipan with quinces and almonds for strong diarrhea and weak stomachs Take nice quinces and steam them with quince juice in a tightly closed pot, or if you do it right they can produce the broth themselves (i.e. can be cooked without adding liquid). When they are nicely soft, remove their skin and take the best of their marrow or flesh so that no stone is added to it. Then take finely ground almonds and clean, bolted sugar as much as there are quinces and almonds. Take the half part of this and boil it into a syrup with rosewater or cinnamon water. Add the flesh of the quinces to this and let it dry or roast in a brass pan together. Then stir it well in a dish and the almonds with it, then place it on a clean table, work in the remaining sugar, and when it is like a gingerbread dough (ein teig zu Lebkuchen), shape it as you like, press in moulds, dry it in a baking oven or a stove (roehrofen). The same way, you may make pears or various kinds from pure quince flesh, or make krapfen (filled fried pastries) of this stuff, but do not work it so it becomes too stiff, leave it nicely soft. You can also fill wafers with it (for fritters).

Quince
Ground Almonds
Sugar
Rose or cinnamon water
I will use my previous recipe for Marchpane with the addition of quince paste.  With that thought in mind, I am trying a new method with my quinces.  I have cut three quinces in half and have placed them into a crockpot with enough apple juice to cover the bottom (about 2 ounces), and have set the crock pot on low.  I will allow the quinces to cook until they are soft. The idea to cook the quince in a crockpot came from a blog post I had found from well fed, flat broke "crock pot membrillo".
NOTE: I did not add sugar at this point because I want to follow the recipe as exactly as possible and I amnot making quince paste.  If this does not work as expected to cook the quinces to a pulp that can be put into marchpane, then it will become quince paste ;-) it will not be wasted.
let the experimentation begin!
A short while later....
Quinces smell very good and are starting to soften but all of the apple juice has been absorbed or cooked off :-/ added more juice and water to come about halfway up the fruit--some of them were getting a bit brown. Still cooking on low and planning on continuing to do so for several more hours.
DAY 2
Pictured below are the lovely cooked quinces.  They cooked in the slow cooker for about six hours yesterday and are just now starting to get a reddish color.  Curiosity is prompting me to clean them of their skin and cores and return them to the crock pot for a bit longer.   I must have done it right, because the pot is full of "juice".  There is more there then what I put in yesterday and the fruit is nearly covered with it.  My next step is to remove seeds and cores, remove skins and remove most of the juice, return the fruit to the crock pot and continue to cook it.  There will not be any additional  sugar added to the fruit.
Also, a small correction from yesterday--it was fresh pressed cloudy apple cider that was added yesterday--not apple juice.  It's the only "apple juice" I drink--sorry for the confusion for those who are following along.  Aren't they lovely?? Heavy,  glossy, and starting to break down!? 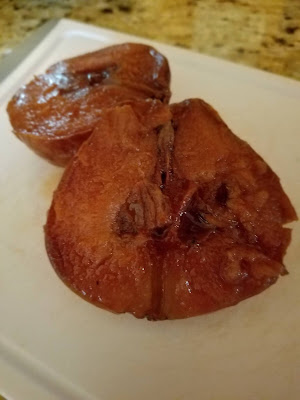 Day Three-- Complete!!
Today I finished the marzipan and ohmygoodness! It is delicious!.  The quinces cooked down to a beautiful maroon color which is offset by the almond flour.
Finalized Recipe
3 tbsp. quince
3/4 cup + almond flour
9 tbps. + confectioner sugar
Mix all ingrediants together until you get a dough that is similar to medieval gingerbread.  Mix two tbsp. almond flour with 1-2 tbsp. confectioner sugar and sprinkle it on your countertop.  Roll to approximately 1/4" and cut into shapes.  Allow to dry in a very low oven.
As you can see I tried to decorate with edible gold stars but they do not show up well on the dough. I wish I could have gotten a better picture of it for you, it is a lovely orangy-pink in color and probably does not need any further decoration.  It is a lovely taste! You taste the quince, then the almonds, and towards the end of the bite, the flavors mix together and it tastes -almost- like cherries.  This is a go for FEAST! 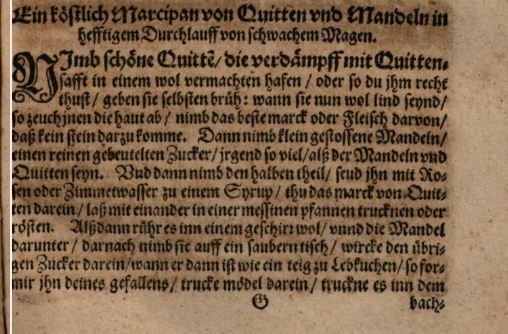