To make a Crystal Jelly and Other Jelly for Service of Several Colours, The Accomplisht Cook, Robert May 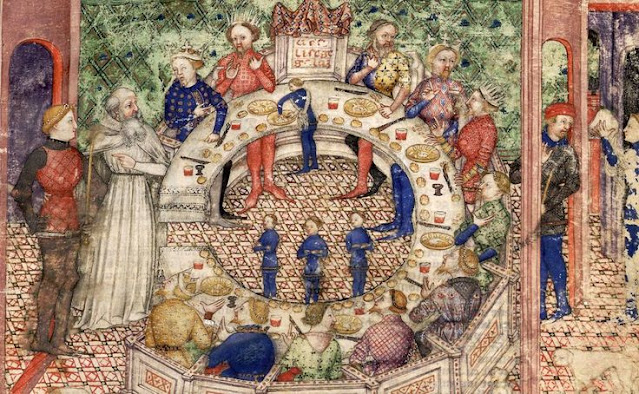 To make a Crystal Jelly.
Take three pair of calves feet, and scald off the hair very clean, knock off the claws, and take out the great bones & fat, & cast them into fair water, shift them three or four times in a day and a night, then boil them next morning in a glazed pipkin or clean pot, with six quarts of fair spring water, boil it and scum it clean, boil away three quarts or more; then strain it into a clean earthen pan or bason, & let it be cold: then prepare the dross from the bottom, and take the fat of the top clean, put it in a large pipkin of six quarts, and put into it two quarts of old clear white-wine, the juyce of four lemons, three blades of mace, and two races of ginger slic’t; then melt or dissolve it again into broth, and let it cool. Then have four pound of hard sugar fine beaten, and mix it with twelve whites of eggs in a great dish with your rouling pin, and put it into your pipkin to your jelly, stir it together with a grain of musk and ambergriese, put it in a fine linnen clout bound up, and a quarter of a pint of damask rose-water, set it a stewing on a soft charcoal fire, before it boils put in a little ising glass, and being boil’d up, take it, and let it cool a little, and run it.
Other Jelly for service of several colours.
Take four pair of calves feet, a knuckle of veal, a good fleshie capon, and prepare these things as is said in the crystal jelly: boil them in three gallons of fair water, till six quarts be wasted, then strain it in an earthen pan, let it cool, and being cold pare the bottom, and take off the fat on the top also; then dissolve it again into broth, and divide it into 4 equal parts, put it into four several pipkins, as will contain five pints a piece each pipkin, put a little saffron into one of them, into another 203 cutchenele beaten with allum, into another turnsole, and the other his own natural white; also to every pipkin a quart of white-wine, and the juyce of two lemons. Then also to the white jelly one race of ginger pare’d and slic’t & three blades of large mace, to the red jelly 2 nutmegs, as much in quantity of cinamon as nutmegs, also as much ginger; to the turnsole put also the same quantity, with a few whole cloves; then to the amber or yellow color, the same spices and quantity.

Then have eighteen whites of eggs, & beat them with six pound of double refined sugar, beaten small and stirred together in a great tray or bason with a rouling pin divide it into four parts in the four pipkins & stir it to your jelly broth, spice, & wine, being well mixed together with a little musk & ambergriese. Then have new bags, wash them first in warm water, and then in cold, wring them dry, and being ready strung with packthread on sticks, hang them on a spit by the fire from any dust, and set new earthen pans under them being well seasoned with boiling liquor.

Then again set on your jelly on a fine charcoal fire, and let it stew softly the space of almost an hour, then make it boil up a little, and take it off, being somewhat cold run it through the bag twice or thrice, or but once if it be very clear; and into the bags of colors put in a sprig of rosemary, keep it for your use in those pans, dish it as you see good, or cast it into what mould you please; as for example these.
Interpreted Recipe
To make clear Jelly:

Add a pinch of saffron to the above

Substitute red wine for white
Add 2 tsp. ground nutmegs and 1 tsp. ground cinnamon or 1 cinnamon sticks to the above

Bloom the gelatin in the water. Heat the stock, wine, lemon juice, spices and sugar until boiling and pour into a bowl, add the gelatin and stir until completely dissolved. Add the rosewater. Put into your mold or pan and allow setting.

Note: You may need to strain the gelatin into your pan to remove undissolved gelatin and spices.