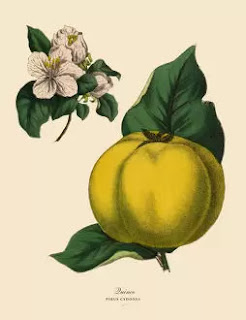 What is Quince? The quince is a member of the Rosaceae family, which also includes apples, pears, apricots, plums and roses. It is one of the earliest known cultivated fruits and appears in many medieval recipes.

Recipes for quince can be found as early as the first century. Dioscorides suggests that quinces which have been peeled and have had their pips removed should be placed into a container as tightly as possible. The container should then be filled with honey and allowed to sit. After approximately a year the fruit will become soft. This was called melomeli, or apple in honey (Wilson, 1985).
The Greeks referred to quinces as Cydonian Apples. In the fourth century, recipes for cidonitum appear. To make this thick spiced jellyish preserve quinces are either peeled and boiled in honey, seasoned with ginger and pepper or they are boiled in a mixture of vinegar and the aforementioned spices and then cooked to the consistency of honey (Wilson, 1985). It is most likely these earliest forms of preserved quinces that became the Elizabethan Chardequynce.

Excerpt from: A nievve herball, or historie of plantes wherin is contayned the vvhole discourse and perfect description of all sortes of herbes and plantes: their diuers [and] sundry kindes: their straunge figures, fashions, and shapes: their names, natures, operations, and vertues: and that not onely of those whiche are here growyng in this our countrie of Englande, but of all others also of forrayne realmes, commonly vsed in physicke. First set foorth in the Doutche or Almaigne tongue, by that learned D. Rembert Dodoens, physition to the Emperour: and nowe first translated out of French into English, by Henry Lyte Esquyer.

Of the Quince tree. Chap. xxxix.