Shimofuri 霜降 (Falling mist)  is the name of a technique that is still in use today. This dish marked the main dish of the second tray or Nino-Zen.  Shimofuri means "frosting," and it is a technique to seal in the  flavor or umami  taste. Shimofuri is often used for cooking fish or meat. It also eliminates the extra fishy smell in the final dish and helps fish pieces to stay intact in soup or broth. The fish I used was cod that had been cut into similar sized pieces. Accompanying the the steamed fish was  hoshi (cold smoked)salmon that had been cured in sake and salt, and seasoned with seven spice powder, gomae (sesame spinach) and an attempt at tamogoyaki :-D, my omelette rolling skills need much improvement!

SHIMOFURI 霜降り (FALLING MIST, AKA BLANCHING) - Slice tai (sea bream) into strips and put them in boiling water. When done, cool it with water. Also called shiramete (whitening). Alternatively, yugaku is anything which is suddenly boiled.

SHŌ NO IRIZAKE 精進の煎り酒 (VEGETARIAN IRIZAKE) - Cut tōfu in dengaku sized pieces and toast them over flame. Take such things as umeboshi and dried turnip, then slice and add them. Boil it all in aged sake. Alternatively, using a little tamari in plain sake is good. There exist oral traditions.

QUICK IRIZAKE 煎酒急候時 - When you are in a hurry, put 2 sticks of katsuobushi and 5 gō of dashi in 1 shō of sake. Taste, add tamari, and serve. You should put 6 or 7 umeboshi in 1 shō of sake. Decoct a good amount of salt and tamari and put it in.
1 shô Katsuo (Bonito)
15-20 Ume -Umeboshi
2 shô of aged sake
Water
Tamari

To start, soak kombu in sake for 3-4 hours. Remove. (No heating is necessary, because kombu is used for bringing just a subtle flavor to the sake.)Add umeboshi to the sake and bring to simmer. Simmer for 5-6 minutes.Add katsuo and continue to simmer for 15-20 minutes until the sake is reduced by half. Remove from heat and let it rest for 5 minutes. Strain the sake through a fine-mesh strainer.

Rinse salmon, and allow to soak for approximately 30 minutes before smoking. Pat dry, place on a pan, skin side down until the salmon dries (approximately 4 hours). Cold smoke salmon until the exterior is bronzed and the salmon feels semi-firm and leathery.

In a dry skillet lightly toast sesame seeds, Sichuan peppercorns & poppy seeds being careful not to burn. Transfer to a bowl to cool. Place all ingredients in a grinder and grind until coarsely ground. Store in airtight jar.

Place the sesame seeds, tahini, sugar, mirin, and soy sauce in a mortar and grind them all together and set aside. Boil water in a large pot and add the spinach bunch in (from the stem side first) and cook for about 1 minute. Take the spinach out and put immediately in icy cold water to avoid the spinach being cooked further. Squeeze out excess water and cut the spinach about 5 cm long. Roll into balls.

Serve with the sesame sauce and sprinkle more sesame seeds on top.

In a small bowl, combine the dashi, salt, soy sauce, sugar, and water. Mix until everything is dissolved. In a medium bowl, beat the eggs and add the seasoning mixture. Mix until well-combined.
Heat a tamagoyaki pan over medium-high heat. Brush a thin layer of oil on the pan. Pour a third of the egg mixture into pan and quickly swirl to cover the entire pan. When the egg is half-set, gently roll the egg. With the rolled egg still in the pan, pour in another third of the egg mixture. Lift up the rolled egg and let the mixture to flow under it. When the egg is half-set, roll the omelette toward you.  Repeat with the rest of the egg mixture. Slice into bite-sized pieces.

With shell/head-on, devein shrimp and quickly rinse under cold running water. Cut off the pointy tip of head and antennas with a pair of kitchen shears (or knife). Cut off the tail at an angle for better presentation (optional).

In a medium saucepan, combine 1/2 cup (120 ml) sake and 2 Tbsp. mirin. Turn on the heat and bring to boil over medium heat and let alcohol evaporate. Add 1/2 cup (120 ml) dashi and 2 Tbsp. soy sauce and bring to boil. Once boiling, lower heat to simmer and place the shrimp in the sauce, bending and holding its back with chopsticks or a pair of tongs to create a shape of Hiragana “つ”. Add all the shrimp to cook at the same time so the cooking time will be similar. Simmer for 4-5 minutes, skimming while cooking on low heat.

Once it’s cooked, immediately transfer the shrimp to a container, saving the cooking liquid. Strain the cooking liquid, preferably over coffee filter or super fine mesh strainer to remove the unwanted protein and fat (the final shrimp will look cleaner and prettier). Discard the filter and let the cooking liquid cool. 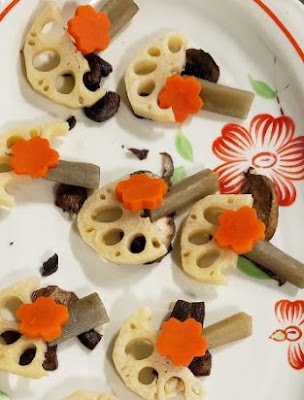 
Peel the carrots and cut into 1/2 inch long rounds. Cook in dashi about 4 to 5 minutes.Stir in sugar, mirin, soy sauce and salt.Turn down heat, keep at a simmer until almost tender.

Peel the renkon and cut into 1/3 inch pieces.- Parboil renkon for about 3 minutes.Put renkon and dashi into a pot and cook about 5 minutes.- Add sugar and mirin. Simmer 3-4 minutes and then add soy sauce.