*Many of my redactions for this feast have been lost to time. Those I have remembered I have placed here.  The recipes that are offered must be attributed directly to the books from which they were first found. 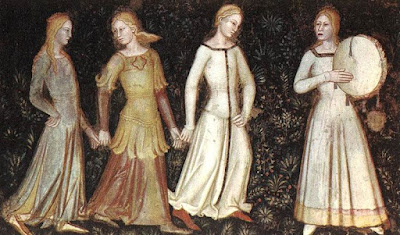 1/3 tsp. each ground cloves, nutmeg and ginger
1 tsp. each cinnamon and pepper

Peel garlic and add to a pot. Cover with water and bring to boil, boil over medium heat for approximately 15 minutes or until tender.  Drain the garlic and shock in cold water.  Drain.

Grind together pork or bacon with garlic in a food processor or crush with a pestle and mortar.

Blend together cream cheese and farmer’s cheese, then add the garlic and pork mixture along with saffron, raisons,  and eggs.  Flavor with  salt and spice blend to taste.

Roll out 2/3 of pastry and line a 9” deep pie tin. Add the filling and seal with remaining pastry.  Bake in a 400 degree oven for approximately 45 minutes to an hour.

To make the sauce combine beef broth and wine and heat over medium heat in a saucepan.  Add breadcrumbs and whisk together until it begins to thicken and sauce becomes smooth. Add remaining spices and wine vinegar and simmer for several more minutes.

Note: It is important to strain the sauce before you serve it.  Once strained sauce can be set aside.

Broil the meat in oven (I grilled it) until it is cooked through. Do not overcook.  Slice and chop the onions and sauté in the fat until golden.  Add meat to onions and cook.  Alternately, if you are grilling, you can grill the onions with the meat.

Add meat and onions to the sauce mixture and heat thoroughly before serving.  Alternatively, you can serve the meat and onions separately (it is suggested with rice or pasta) and leave the sauce on the side for dipping.

I served the meat with the sauce without benefit of rice or pasta and it was well received.
Fungi di Monte -

Trim and clean the mushrooms.  Cook in boiling water for about ten minutes and then drain thoroughly.  Sweat the onion in olive oil until soft and golden.  Add the mushrooms to the onions and sauté. When mushrooms start to brown, season with salt and spices.  Serve when golden brown.
Del Brodo Saracenico -

1 capon or chicken
1/3 cup blanched almonds
1/3 cup raisins
Handful of dates and prunes cut in half
2 slices of bread (I used manchet, sourdough would work too)
1 cup white wine
Juice of 1 or 2 lemons
Juice of 1 orange
1 ounce salt pork fatback or bacon cut into 1/8 dice
1 apple and pear peeled, cored and chopped
Salt to taste

Spice Blend
¼ tsp. each nutmeg and black pepper
1 pinch of ginger and cloves

Salt the capon or chicken and roast it until brown.  Try not to overcook or it may fall apart when you simmer it.  Toast the bread and mix it with the juice of the orange, lemon and wine. When the chicken is done, carve it into serving pieces and set aside.  Pour the juice and wine mixture into a large saucepan or casserole dish and add the chicken, spice mix, fresh and dried fruit, almonds and bacon or salt fatback pork.  Bring to a boil and simmer for 15-20 minutes.  Check for seasoning and serve.

Carefully wash the split peas, taking care to remove any stones and leave them to soak in cold water for an hour. Cook the peas in 2 quarts of lightly salted water until they are soft and can be crushed with light pressure.

Bring milk (or almond milk) to boil and add ginger and saffron.  Remove from heat.  In a small bowl beat the egg yolks with a whisk and pour them through a strainer into another bowl large enough to hold the milk.  Slowly pour the hot milk into the beaten yolks, whisking constantly.

In a heavy skillet heat the lard over medium-high heat and add the cubes of cooked meat, sauté until crisp and brown.

Reheat the peas over low heat, stirring to prevent them from burning and slowly stir in the yolk mixture and heat till slightly thickened.  At this point do not allow the soup to boil.  Check for salt. Garnish with meat before serving.  Or – serve the soup with the meat on the side and allow guests to add to taste.
De Lasanis -

Dissolve yeast in water and let proof for 10 minutes.  Mix flour and salt and add the yeast mixture to it.  Form into a pliable dough that is elastic and not stiff.  Cover the dough with a towel and let rise at least an hour.

Towards the end of the rising time you will want to put a kettle of water to boil, salt it as you would for any pasta.

Punch down dough and then knead it back into a ball. Divide ball in half and roll it to an even thickness of about 1/16 of an inch. The dough is very sticky so be sure to flour your surfaces well. Cut your dough into  2 inch squares and drop them into the boiling water.  They will rise to the surface when cooked.

Make a marinade with wine, garlic, coriander, caraway and pepper.  Tie the roast (if necessary) and pierce it all over with salt. Place the roast in the marinade, turning to coat all over.  Marinate for a few hours or overnight, turning occasionally.

Preheat oven to 350 degrees and roast the pork for about 90 minutes, basting frequently.  When it is done, remove the roast from the pan and let it rest in a warm place.  To make the sauce, bring pan juices to a boil and add broth, taste for seasoning and serve on side with the meat.

Shell fava beans and plunge them into boiling water for 5 seconds or so.  Drain them and refresh in cold water.  Using a paring knife remove the tough outer skin of each bean. Cut the pork into tiny dice and add the broth, beans and pork to a saucepan or casserole, bring to boil and cook for approximately 10 minutes or until they begin to break apart.  Add parsley and mint and return to the boil and cook for a few moments.  Add salt to taste and serve.

You can bake your onions in the fire if it is hot by placing them in the embers.  If not, wrap them in foil and roast them in a 500 degree oven for about an hour.

Remove the onions from the oven and unwrap them, the skin should be blackened and the flesh will be caramelized. When the onions are cool enough not to burn you, slip them from their skin and cut them into very thin slices with a sharp knife.
Works Cited

Put the onions into a salad bowl, season with salt, pepper and spice mixture.  Add olive oil an vinegar to taste, mix and serve.

Roll out the pastry and line a 9” pie or tart pan at least 2” deep.  Line it with aluminum foil and fill with beans or pie weights.  Bake for about 15 minutes, remove the weights and the foil and return to the oven for about 5 more minutes.

Whisk together egg yolks, sugar, cinnamon and salt until smooth and glossy and then slowly beat in the milk.  Pour the egg mixture into the partly baked shell, return to the oven, and bake in a 350 degree oven for an hour or until set but still soft enough to quiver slightly when moved.  If top is browning to quickly, cover it with aluminum foil.

When done, remove from oven, sprinkle with rosewater and garnish with candied orange peel.

Roll out the pastry and line a 9” pie or tart pan at least 2” deep.  Line it with aluminum foil and fill with beans or pie weights.  Bake for about 15 minutes, remove the weights and the foil and return to the oven for about 5 more minutes.
For the filling

Mix together cream cheese, sugar, binger, salt and butter.  Whip egg whites enough to break them apart and pour into the cream cheese mixture. Beat in some milk until the mixture has the consistency of a thick cream.  Pour the filling into the partially baked pie crust and bake for one hour in a 375 degree oven. Monitor carefully – the crust must be thoroughly baked but it must be light colored.

When tart has been cooked, sprinkle with sugar and rosewater and garnish with the cherries