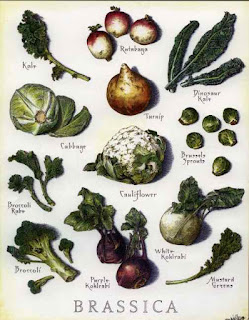 Harleian MS 279 has a varied selection of recipes which include vegetable based pottages. I will be working with these recipes over the next few weeks as part of my ongoing research into this manuscript. To understand these recipes better it is important to understand the meaning of the word “Wortys” In general, “Wortys” refers to any member of the Brassica family. This family consists of annual and biennial herbs including kale, cabbage, and mustards. Brassica Oleracea, seems to be the “parent” plant and is a wild cultivar native to Europe. It is a perennial plant, and it is believed that from this original plant all forms of cabbage, cauliflower, collards, brussel sprouts, turnips and kale derive.

Kale and cabbage are descended from the same common ancestor, but kale was the more common of the two vegetables during the middle ages. It was known as cole, or colewort and was one of the most widely eaten vegetables in our period. In fact, kale most likely resembles some of the very earliest cabbages. The round headed cabbage that we are familiar with was developed during the 14th century and was referred to as cawel, cabaches or caboches. Cabbage itself has a long culinary history. Little is known about how the plant was cultivated. It is natural to assume that the plants that developed with the largest and the most leaves, were those selected to be propagated.

“Theoprastus described cabbage in 350 BC and the Greeks cultivated it as early as 600 BC and they believed that cabbage was a gift from the gods. Pliny reported a soft-headed form in ancient Rome and the Saxons and Romans probably cultivated it and introduced it to the British Isles. The hardheaded types were only mentioned in the 9th century. The early Egyptians are said to have worshipped it. The plant was used for medicinal purposes to treat gout, stomach problems, deafness, headache and hangovers in the early days. Cabbage is now grown throughout the world.”  Cabbage

It is safe to assume, therefore that using a variety of greens from the brassica family that would have been known in period would fulfill the recipes below. This includes mustards, kale, collards (known to the Greeks and Romans), kohlrabi (first described in Europe in 1554), broccoli (known to Greeks and Romans), cauliflower (sixth century), rapini (aka broccoli rabe, known to the Romans), turnips, and rutabaga (also known as swede or neep, first reference 1620 so use your best judgment). The recipes listed below can be found here: Two fifteenth-century cookery-books : Harleian MS. 279 (ab 1430), & Harl. MS. 4016 (ab. 1450), with extracts from Ashmole MS. 1439, Laud MS. 553, & Douce MS. 55 Thomas Austin

.ij. Lange Wortes de pesoun.—Take grene pesyn, an washe hem clene an caste hem on a potte, an boyle hem tyl þey breste, an þanne take hem vppe of þe potte, an put hem with brothe yn a-noþer potte, and lete hem kele; þan draw hem þorw a straynowre in-to a fayre potte, an þan take oynonys, and screde hem in to or þre, an take hole wortys and boyle hem in fayre water: and take hem vppe, an ley hem on a fayre bord, an cytte on .iij. or iiij., an ley hem to þe oynonys in þe potte, to þe drawyd pesyn; an let hem boyle tyl þey ben tendyr; an þanne tak fayre oyle and frye hem, or ellys sum fresche broþe of sum maner fresche fysshe, an caste þer-to, an Safron, an salt a quantyte, and serue it forth.

.v. Whyte wortes.—Take of þe erbys lyke as þou dede for jouutes, and sethe hem in [supplied by ed.] water tyl þey ben neyshe; þanne take hem vp, an bryse hem fayre on a bord, as drye as þow may; þan choppe hem smale, an caste hem on a potte, an ley hem with flowre of Rys; take mylke of almaundys, an cast þer-to, & hony, nowt to moche, þat it be nowt to swete, an safron & salt; an serue it forth ynne, ryȝth for a good potage.