For Gusset that may be another potage, A Proper Newe Booke of Cookerye, Anonymous 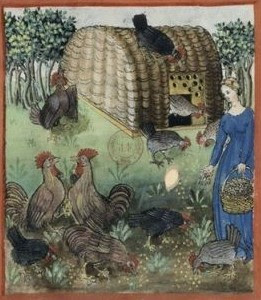 Note: For this dish the chicken was poached in the seasoned broth.  Sliced and then served over sippets of bread.  It was very well received.
For Gusset that may be another potage.
Take the broathe of the Capons and put in a fayre chafer, then take a dosen or syxtene egges and stere them all together whyte and all, then grate a farthynge whyte loafe as smale as ye canne, and mynce it wyth the egges all togeather, and putte thereto salte and a good quantite of safiron, and or ye putte in youre egges, putte into youre brothe, tyme, sauerye, margeron and parseley small choppd, and when ye are redye to your dynner, sette the chafer upon the fyre wyth the brothe, and lette it boyle a lyttle and putte in your egges and stere it up well for quaylinge the less. The less boylynge it hathe the more tender it wyll be, and then serve it forthe two or three slyces upon a dysshe.
Interpreted Recipe
4 C clear chicken broth
1 tbsp. Minced parsley
1 tsp. Salt
Pinch of saffron
⅛ tsp. each marjoram, thyme, savory
2 eggs
2 tsp . bread crumbs
3 slices hot buttered toast


Add parsley, salt, saffron,marjoram, thyme, and savory to chicken broth and simmer for 15 minutes. Beat the eggs with the bread crumbs and stir them into the broth. Turn off the heat and let the broth simmer for a minute or two, stirring constantly. Divide the toast among individual soup bowls and pour the hot broth over it immediately.
Email Post
Labels: A Book Of Cookrye English Feasts First Course Meat Soup