Almond milk cream cheese? Yes, yes, yes! This dish is definitely being added to my repertoire of things to make at feast.  Despite the fact the instructions sound forbiddingly difficult, this dish is very easy to make.  It starts with my quick and dirty almond milk recipe and ends with a sweet, creamy Lenten substitute for cheese or butter.

.xij. Fride Creme of Almaundys. — Take almaundys, an sta?«pe hem, an draw it vp wyth a fyne thykke mylke, y-temperyd wyth clene water; throw hem on, an sette hem in fe fyre, an let boyle onys : fan tak hem a-down,an caste salt )7er-on, an let hem reste a forlongwey ^ or to, an caste a lytyl sugre Jier-to ; an J^an caste it on a fayre lynen clothe, fayre y-wasche an drye, an caste it al a-brode on fe clothe with a fayre ladel : an let J^e clothe ben holdyn a-brode, an late all j^e water vnder-nethe fe clothe be had a-way, an panne gadere alle fe kreme in fe clothe, an let hongy on an pyn, and let fe water droppe owt to' or .iij. owrys ; )7an take it of J^e pyn, an put it on a bolle of tre, and caste whyte sugre y-now ]7er-to, an a lytil salt ; and ^if it Tvexe J^ikke, take swete wyn an put ]jer-to 'pat it be nojt sene : and whan it is I-dressid in the maner of mortrewys, take red anys in comfyte, or ]'e leuys of borage, an sette hem on J^e dysshe, an serue forth.

For more information on this and similar recipes, please vist Dan Myers "Medieval Cookery" by clicking the link below.

xij - Fride Creme of Almaundys. Take almaundys, an stampe hem, an draw it vp wyth a fyne thykke mylke, y-temperyd wyth clene water; throw hem on, an sette hem in the fyre, an let boyle onys: than tak hem a-down, an caste salt ther-on, an let hem reste a forlongwey (Note: Other MS. forlange.) or to, an caste a lytyl sugrether-to; an than caste it on a fayre lynen clothe, fayre y-wasche an drye, an caste it al a-brode on the clothe with a fayre ladel: an let the clothe ben holdyn a-brode, an late all the water vnder-nethe the clothe be had a-way, an thanne gadere alle the kreme in the clothe, an let hongy on an pyn, and let the water droppe owt to (Note: two.) or .iij. owrys; than take it of the pyn, an put it on a bolle of tre, and caste whyte sugre y-now ther-to, an a lytil salt; and 3if it wexe thikke, take swetewyn an put ther-to that it be no3t sene: and whan it is I-dressid in the maner of mortrewys, take red anys in comfyte, or the leuys of borage, an sette hem on the dysshe, an serue forth.

12. Cold Cream of Almonds. Take almonds, and stamp them, and draw it up with a fine thick milk, tempered with clean water, throw them on, and set them on the fire, and let boil once: then take them down, and cast salt thereon, an let them rest a furlongway or two, and cast a little sugar thereto; and then caste it on a fair linen cloth, fair washed and dried, and cast it all above on the cloth with a fair ladle: an let the cloth be held above and let all the water underneath the cloth be had away, an than gather all the cream in the cloth, and let hang on a pin, and let the water drop out two or three hours; then take off the pin and put it in a bowl of wood, and caste white sugar thereto that it is not seen: and when it is dressed in the manner of mortrewys, take read anise in comfit, or the petals of borage, and set them on the dish, and serve it forth.

Interpreted Recipe  Makes approximately quarter of a pound of "cheese"

Once you have made the almond milk, you will need to strain the mixture through a sieve to remove as much of the almond bits as you can.  Put the strained almond milk and salt into a pot and heat to boiling being careful not to overheat or to burn it.

Note: Saffron can be added to the almond milk to make it yellow like butter at this stage.  I did that and I was impressed with the results. 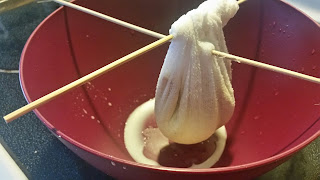 Remove from heat and strain through a cheesecloth for several hours or overnight.  When the dripping has stopped, remove the almond mixture from the cloth and place it in a bowl.  Unlike making cheese from dairy, the liquid that is produced from the almonds can be discarded.  The whey from cheese making is full of whey protein and can be used in smoothies or baking.

Add sugar to taste in the bowl.  If the mixture is a bit too dry or crumbly wine can be added as well.  I used approximately 2 tablespoons of sugar and then I added 2 teaspoons of the pouder douce to this.  I did not need to add wine because the addition of the sugar made the almond "cheese" very smooth, similar to cream cheese. At this point I imagine you would be able to caste it into molds, or serve it in bowls garnished with comfits, or flowers if you see fit.

.lxxvij. Crem de Coloure.—Take an make þicke Milke of Almaundys, & do it in a potte, & sethe it ouer þe fyre; þan take a fayre Canvas, an put it þer-on, & late renne out þe Water; þen take þe halfyndele, & put it in a pot of erþe; þen take the oþer halfyndele, & parte it in [supplied by ed.] to,*. [Two. ] & make þe half ȝelow, & do þer-yn Wyn, Sugre, Clowes, Maces, powder of Canelle; take [gap: reason: blank in MS.] & grynd a lytel in a morter; [leaf 16 bk.] þan temper it vppe wyth almaunde mylke, & do euery of hem in a potte, an loke þat it be y-like chargeaunt, & sette it ouer þe fyre, an boyle it a lytyl, an serue forth.

77. Cream of Color -- Take and make thick milk of almonds, and do it in a pot, and cook it over the fire; then take a fair canvas, and put it there-on & run out the water; then take the half (halfyndele), and put it in a pot of earth; then take the other half (halfyndele), and part it in two and make the half yellow, and do there-in wine, sugar, cloves, maces, powder of cinnamon; take and grind a little in a morter, then temper it up with almond milk, and do every of them in a pot, and look that it be like thick and set it over the fire and boil it a little and serve forth.

78. Colored Soup (Stew) without fire - Take four pound of almonds, and lay in water overnight (ouer eue), and blanch them, and on the morrow grind them right well, and draw there-of a thick milk; then take rice and wash them clean, and grind them well, and draw them up with the milk through a strainer, and do it on a bowl, and part it in the vessel, and do in all white sugar, and every vessel, cloves, mace, cubebs and powder cinnamon; and let that on part be white, that other yellow, and that other green with parsley, and lay of every a slice in a dish, and look that milk be tempered with wine, and that other with red wine.
#medievalfood  #scafeast  #scacook  #historicfood #harleianMS279
Email Post
Labels: 15 279 Almond Milk Cheese Harleian MS 279 Medieval Pottages SCA