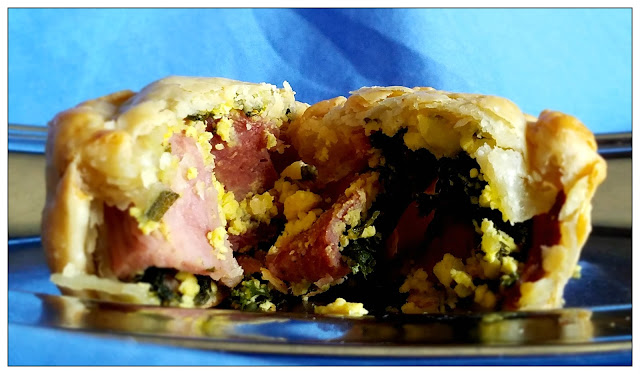 Gammon of Bacon (A Book of Cookrye, 1591) – Ham and Bacon -To bake a gammon of Bacon. Take your Bacon and boyle it, and stuffe it with Parcely and Sage, and yolks of hard Egges, and when it is boyled, stuffe it and let it boyle againe, season it with Pepper, cloves and mace, whole cloves stick fast in, so then lay it in your paste with salt butter.

Remove skin from bacon and discard. Place the bacon in a large pot and add enough water to cover. Cover, bring to a boil, and cook for 30 minutes. Put parsley, sage, egg yolks, and spices into a bowl and mix well. Remove bacon from pot, cut open, and stuff with mixture. Wrap in pastry and bake at 350°F until done - about 1 hour.

This is a delicious savory tidbit that would make a lovely hand pie to serve at events. It tastes like a holiday in a pie crust. Please note that I used thin slices of ham that I stuffed with the stuffing and rolled into "olives" cutting them so that they fit into the pie.
Email Post
Labels: 16 A Book of Cookrye Baked Dish Curia Feasts Meat SCA