December 13, 2015
The first recipe found in Harleian MS 279 is for a simple dish of greens cooked in broth called Lange Wortys de chare. The second recipe includes the addition of green peas that have been cooked till they turn to mush and onions. This recipe was the most favored of the green recipes that have been cooked by my non-SCA teen guinea pigs. I have to admit, the broth is a very odd shade of muddy olive green, which is a little bit off-putting, let's be honest...mud colored anything is scary when you are putting it in your mouth (anybody else remember being force fed mud pies as a youth?).

Peas are among the oldest cultivated crops that we have.  Apicius published no less than nine recipes for dried peas in his cookbook. It is estimated that peas were known in France around 800 and that Charlemagne had them planted throughout his domain.  By the 1200's this member of the legume family was such a popular item vendors would call out in the streets "I have fresh peas in the pod!" Before the end of the 16th century, there were many different varieties of peas; short, tall, white, yellow, green, smooth, wrinkled and pitted.

I find this recipe another example of medieval ingenuity--take a little bit of this, a little bit of that, till it is "enough".  "Enough" has such a delicious connotation, doesn't it? It means ample to satisfy the desire, adequate to fulfill the need.  We don't need to measure in cups, or tablespoons, pinches or ounces when interpreting medieval recipes, do we? They encourage us to be "enough".  I think I am going to make that my new motto. Out with simplify--in with enough...but I digress

Legumes and pulses are two terms that you will see when referring to the family of plants that includes any of its fruits enclosed in a pod. This includes lupins, peas, lentils and beans. When fresh they are legumes, and when dried, called pulses. I was surprised to discover that Legumes are the third largest flowering plant group! The word "legume" is derived from the Latin "legere"  meaning "to gather".

For reference, when referring to "green" peas, it is most likely freshly shelled peas that are being referred to, and not the color of the pea being used. With that thought in mind, this dish would most likely have been served in spring. However I would not let that stop me from serving it in fall or winter, using dried peas instead of fresh.  The cooking directions would need to be adjusted for the additional time needed to cook the dried product to mush.


.ij. Lange Wortes de pesoun.—Take grene pesyn, an washe hem clene an caste hem on a potte, an boyle hem tyl þey breste, an þanne take hem vppe of þe potte, an put hem with brothe yn a-noþer potte, and lete hem kele; þan draw hem þorw a straynowre in-to a fayre potte, an þan take oynonys, and screde hem in to or þre, an take hole wortys and boyle hem in fayre water: and take hem vppe, an ley hem on a fayre bord, an cytte on .iij. or iiij., an ley hem to þe oynonys in þe potte, to þe drawyd pesyn; an let hem boyle tyl þey ben tendyr; an þanne tak fayre oyle and frye hem, or ellys sum fresche broþe of sum maner fresche fysshe, an caste þer-to, an Safron, an salt a quantyte, and serue it forth.

2. Long Wortes (Greens) of Peas-Take green peas an wash them clean an caste them on a pot, an boil them till they burst, an than take them up of the pot, an put themwith broth in another pot, an let them cool; then draw them through a strainer into a a fair pot, an than take onions, and shred them in two or three, an take whole wortys (members of the brassica family, example kale, collards, or cabbage) and boil them in fair water, and take them up, an lay them on a fair board, an cut in three or four, an lay them to the onions in the pot, to the drawn peas; an let them boil till they be tender, an than take fair oil and fry them, or else, some fresh broth of sum manner fresh fish, an caste there-to, an saffron an salt a quantity, and serve it forth. 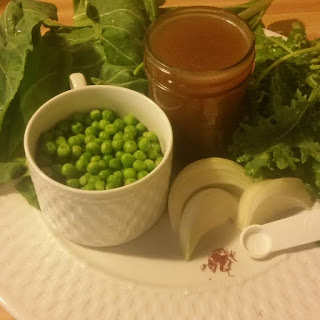 You could follow the package directions for your frozen peas and then follow the directions above to continue to boil them until they burst--or you can cheat and bless modern technology.  I cheated.

I heated my peas for approximately five minutes and then threw those bad boys into a blender and blended them to a pulp. I did strain them through a strainer to remove any large bits that might have been left.

I boiled my greens in the water until they were tender and then pressed them dry in a towel. By the way, I noted *at this point* that the liquid is very green, and could possibly be used as a food coloring! Next adventure please.....

I then brought the broth, saffron and the onion to a boil and added the greens back in, cooking till the onion was tender.  It was at this point I stirred the pea puree back into the broth.  I let cook about five minutes longer and then served.

The peas add a sweetness to what would otherwise be a savory dish and do balance the flavors very well. This is definitely on my list of things to possibly serve at a luncheon or a feast. It is another very economical and budget friendly dish.

October 12, 2016
Fall is here and with it an abundance of apples! What better way to pick up the pen again then with this fruit?? Apples have a long and varied history. Carbon dating of seeds found in Southwestern Asia suggest that apples may have originated there. There is also evidence of fossilized apple seeds dating to the Neolithic period found in England which suggests that a variety of wild apple was known.
Whatever the origin, we do know that the Greeks were familiar with apples.  Homer writes about them in the Odyssey.  Hippocrates recommends sweet apples with meals as a way of aiding in digestion. The Romans however, developed the fruit that we are aware of today through the process of cross breeding for sweetness and grafting.   Pliny the Elder describes multiple varieties of apples that were cultivated in Rome.